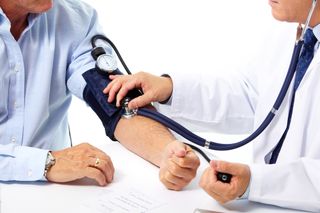 High blood pressure might actually be a good thing, when the condition occurs in older people who are especially frail.

Researchers found that among people older than 65 who were unable to walk 20 feet, those with high blood pressure were 62 percent less likely to die over a five-year period, compared with those who had normal blood pressure.

The research "demonstrates that older adults are a heterogeneous group," and that they ought to be treated as such by health care providers, said study researcher Michelle Odden, an epidemiology professor at Oregon State University. “We need to look at the older, frail population to see if they’re different."

In the study, the researchers used data gathered from 2,340 people over age 65 during the National Health and Nutrition Examination Surveys, conducted by the Centers for Disease Control and Prevention (CDC) in 1999-2000 and 2001-2002. Participants answered questions about their health, and were also asked to walk 20 feet at their normal rate.

Participants who walked at a rate of 0.8 meters per second were classified as healthy, and in this group, those with high blood pressure were more likely to die over the study period than those with normal blood pressure.

As people age, blood vessels lose their elasticity, making it harder for the body to pump blood effectively.

"Some people might need a little bit more pressure to keep the blood pumping to their essential organs," Odden said, adding that the reasons why some people’s blood vessels lose their elasticity sooner than others are unknown.

The researchers cautioned that this finding does not mean that treating high blood pressure is harmful or unnecessary.

Could higher blood pressure be good for some?

The study is in line with other recent research suggesting that lowering blood pressure may not be a universal goal, said Dr. Howard Weintraub, clinical associate professor at New York University’s Langone Medical Center, who was not involved in the study.

"We are learning that one size doesn’t fit all, and in certain populations — particularly the elderly who are frail — lowering their blood pressure to routine numbers may not be the best idea," Weintraub said.

Weintraub also noted that while the research presents a valid correlation, he is wary of the study being misinterpreted.

"Americans utilize the 'chicken soup' philosophy — if a little is good, a lot is better," Weintraub said. It’s important for people to speak with their physicians about the ideal blood pressure will be for them, without assuming anything, Weintraub said.

The study was published today (July 16) in the journal Archives of Internal Medicine.

Pass it on: For older, frail adults, high blood pressure may actually be healthier, though in healthy adults, it is still associated with higher risk of mortality.