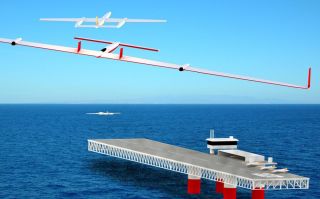 Drones acting as flying batteries could dock with an electric plan in midair during a transatlantic flight.
(Image: © Flight of the Century)

An aviation pioneer wants to recreate aviator Charles Lindbergh's flight across the Atlantic and show the world why electric planes can fly long-distance. His shrewd plan for success involves replacing the plane's batteries in midair using no less than five drones.

The Flight of the Century project has readied a prototype plane for its first flight tests at Inyokern Airport in Southern California in July. That represents a first step toward the transatlantic flight scheduled for 2014 — a journey that will require a finalized version of the electric plane to drop any used batteries and dock with drones that represent flying batteries with wings.

"The whole premise of our technology is that we are working to provide long-range electric flight now, in the near term, even if no improvements in batteries were forthcoming," said Chip Yates, founder and CEO of Flight of the Century. "We don't want to wait for batteries to enable long-range flight, and we don't think we have to."

Electric planes remain technological curiosities rather than practical aircraft because of limits in battery storage and the weight of the batteries. Renewable energy such as solar power could theoretically recharge a plane in midflight, but only has enough juice to power the lightest and most energy-efficient aircraft. The limitations forced Yates and his team to find different solutions for long-range electric flight.

Military aircraft have hooked up to flying tankers to refuel in midair for decades — an inspiration for the idea of replacing the electric airplane's batteries in midair. In this case, drones turned into flying batteries would tether and dock with the Long-ESA plane to deliver a fresh charge.

Dropping used batteries in midflight also represents a way to save on power by shedding dead weight. The Long-ESA team has designed a way for battery packs to parachute from the plane and use GPS guidance to reach collection stations below.

A successful 2014 flight could do more than shatter some world records. The U.S. military could possibly find some interest in the idea of stretching out the flight times for electric drones.

The Flight of the Century could also go a long way toward realizing the dream of Elon Musk — Silicon Valley entrepreneur, private spaceflight pioneer and founder of electric car startup Tesla Motors — who predicted all vehicles could go electric.