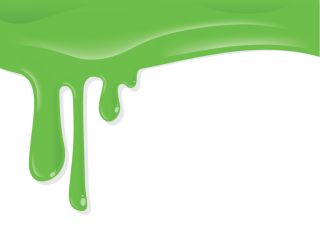 Like Dr. Seuss' oobleck, non-Newtonian fluids get thicker as they are deformed, say by someone running across the fluid.
(Image: © apartment, Shutterstock)

Lots of people have demonstrated that, surprisingly, if you fill a pool with water and cornstarch you can run across it. Stop, and you sink. How that happens, though, has been something of a mystery in fluid dynamics.

The usual explanation for this "walking on water" phenomenon: Suspensions — that's any liquid with particles in it — are non-Newtonian fluids that get thicker, or more viscous, as the rate of shear (deformation caused by, say, running across it) goes up. Common examples are ketchup, blood and toothpaste. "Normal" fluids, like water, flow and their viscosity stays constant.

Scott Waitukaitis and Heinrich Jaeger, physicists at the University of Chicago, have found that the situation is a bit different: When you hit a suspension the particles get compressed and transition into a solid state for a few moments.

Waitukaitis and Jaeger noted in their research paper, published in tomorrow's (July 12) issue of the journal Nature, that the usual mechanisms proposed weren't adequate to explain things like how a person can run on the cornstarch-and-water mix (also known as "oobleck" in a homage to Dr. Seuss and his book "Bartholomew and the Oobleck"). "Based on a notion whereby the mechanism has to do with shear — where sliding particles past each other generates an increase in resistance to shear — that's a perfectly valid model, but it's not enough to support a person's weight," Jaeger told LiveScience. [Twisted Physics: 7 Mind-Blowing Findings]

So the two scientists filled containers with oobleck and hit the mixture with rods. Using high-speed photography and X-rays, they saw that when the rod hits the suspension, there is a part of it below the rod that becomes solid. The particles in the suspension are jammed together, creating a columnlike region that is rigid enough to keep the rod from sinking into the oobleck.

The thickened and now-solid region can propagate all the way to the bottom of the container. Jaeger noted the solidifying zone transmits force quite well — enough that at least one container broke – and it can even rebound and push the rod back up if the container is shallow enough. But it should be noted that contrary to earlier models, the container walls — or lack thereof — don't affect whether the rod or a running person stays on top of the oobleck. The same thing would happen if you filled the ocean with it and did the experiment again.

After the impact, the solid zone starts to melt away, since there isn't any force compressing it anymore (except the small amount due to gravity). That's why when you stop running across the oobleck you'd sink. It also means that while one can run on such a substance, driving on it would be more of a problem — a wheel isn't smacking down on a small region. [See Video of Oobleck Experiment]

In fact, there is a minimum particle size for this phenomenon to work; it's about one micron (or one one-millionth of a meter, about the size of some bacteria). That's why milk, even though it is a suspension, doesn't behave like oobleck — the particles just aren't big enough and in a high enough concentration.

The phenomenon is roughly similar to what happens with dry particles. Jaeger and Waitukaitis got into this line of research partly because of earlier work on making robots more flexible. Particles seemed to be one answer — coffee bricks, for example, are solid when compressed in their vacuum packaging by the pressure of the surrounding air. Cut open the packet, though, and the grounds pour out. This is the first time it's been demonstrated in a liquid, though.

In addition to being a cool physics finding, Jaeger said there's also a practical side. Some bulletproof vests take advantage of this property, using silica particles suspended in polyethylene glycol. By soaking Kevlar in the suspension, one creates a layer of fluid that is held in place by the fibers. When it is hit, it thickens, distributing the impact energy. That allows Kevlar armor to be made with fewer layers, making it more flexible and lighter.