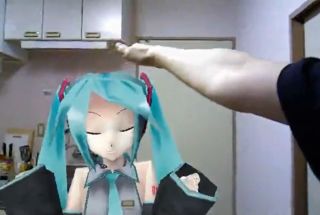 Japan's virtual pop star gets an augmented reality makeover that allows a person to interact with her in real life.
(Image: © alsionesvx (YouTube))

Some Japanese music fans just can't get enough of virtual diva Hatsune Miku, whether she's singing and dancing in a live holographic concert or on a handheld video game console. A super fan decided to take the next step by hacking a video game so that he could interact with the imaginary pop idol in the real world — for better or for worse.

The hacker posted a video showing Miku's anime figure strolling around real-world settings such as a park and inside a kitchen. But the video takes a creepier turn when the hacker shows how he can not only pat Miku's head and flick her tie, but also strike her and engage in other ungentlemanly behavior that would likely get him arrested for molestation in real life.

Such content in the demonstration is unfortunate, because the technical display is reasonably impressive. The hacker used video goggles and an ASUS Xtion (a motion-sensing device similar to Microsoft's Kinect) to make the augmented reality version of Miku. Similar technology could bring museum displays to life, or lend new realism to virtual training for the military and high-tech labs.