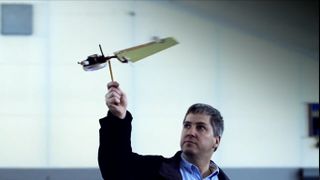 Today's U.S. military often relies on aircraft-size drones costing millions of dollars that operate from airfields or truck-mounted launchers. Tomorrow's soldiers could simply scatter a handful of tiny hovering drones resembling maple seeds to act as a surveillance swarm on the battlefield.

The small flying robot, called Samarai, comes from the labs of U.S. defense company Lockheed Martin. It has a single wing with a tiny propeller on the end that spins it around at 600 to 900 times per minute — allowing it to either take off from the ground like a helicopter,  from a handheld launcher, or by spinning up the rotor and then launching with a flick of the wrist.

Special image software gives drone operators a blur-free view from the onboard camera despite the drone's constant spinning. The operator can also point the camera anywhere in a 360-degree view around the drone.

Drones such as Samarai may eventually swarm across more than just battlefields — they could also find similar use for emergency rescue workers and law enforcement. [Drone Census Tracks US Government's Secret Swarms ]