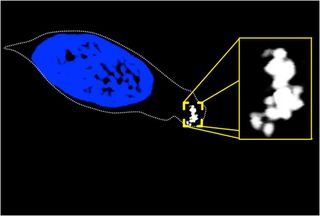 Confocal microscopy image of a cell from the nasal passage of a trout. The outline of the cell is indicated by a dotted line, the blue area is the nucleus, and the white substance highlighted in the yellow box is a clump of magnetite crystals, which rotate the cell one way or the other in the presence of a magnetic field.
(Image: © Image courtesy of Hervé Cadiou)

Researchers have isolated what are essentially tiny compass needles in the noses of rainbow trout that may explain these and many other animals' incredible ability to navigate across vast distances.

When cells scraped from the trout's nasal passages were placed in a rotating magnetic field, a clump of tiny iron-rich crystals inside the cells called magnetite — the same mineral used in compass needles — spun in synchrony with the field, turning the cells around with them.

The strength of the crystals' magnetic response, and their firm attachment to the surrounding cell membranes, lent strong support for what scientists have long suspected: That these crystals lean back and forth like a sail in response to Earth's weak magnetic field, and that the cells they are embedded in somehow convey their swaying movements to the brain. This is believed to confer trout and other migratory animals with a "magnetic sense" by which to judge direction.

As detailed in a new paper published online July 9 in the journal Proceedings of the National Academy of Sciences, the researchers found that the magnetic cells in the trout's noses swayed in response to a magnetic field 100 times more forcefully than had previously been predicted. "More importantly, we show for the first time that the internal compass needle has a strong connection to the plasma membrane [or outer membrane] of the cell, which is important to realize an immediate sensing process," said lead researcher Michael Winklhofer of the University of Munich in Germany.

The results show that the magnetic cells "clearly meet the physical requirements for a magnetoreceptor" capable of rapidly detecting small changes in Earth's magnetic field, the researchers said.

The strength of Earth's field varies in a predictable way across the planet's surface, allowing migratory animals to use it for position-finding. By learning the strength of a field that exists at a particular destination, the animals can home in on it. That much is pretty well established in the science field; what has remained mysterious is how these animals use magnetic-field changes to navigate. [What If Earth's Magnetic Poles Flip?]

Scientists think Earth's magnetic field might urge migratory animals in the right direction like a guiding hand pressing on them. "I think it is similar to touch or pressure. The magnetite-based magnetic sense is innervated by the trigeminal nerve, which mediates touch (heat, cold and pain). If the inner compass needle of a cell points in a certain direction in space, and the fish makes a 90-degree turn, the cell will fire and tell the brain: 'I am 90 degrees out of my preferred direction,'" Winklhofer told LiveScience.

Kenneth Lohmann, a distinguished professor of biology at the University of North Carolina who studies animals' magnetic sense, said the new results have ramifications beyond the realm of rainbow trout.

The work may also lead to more rapid advances in the understanding of animal migration simply by demonstrating a new technique for identifying magnetic cells — that is, they subjected tissue to a rotating magnetic field, which made magnetic cells start spinning and be easily spotted.

"For about 30 years now, many researchers have suspected that at least some animals use microscopic crystals of the mineral magnetite to sense magnetism," Lohmann said. "A major problem, however, has been that the magnetite particles in animals are tiny, and finding them under a microscope has proved to be exceedingly difficult.  The new technique described in the paper may make it much easier to identify magnetite-containing cells." [Vision Quiz: What Can Animals See?]

Part of the challenge was that only one in 10,000 nasal cells is magnetic, Winklhofer said. The fact that magnetism is dispersed through the animals' nasal tissues is part of what makes it work so well: "If they were as closely packed as photoreceptor cells in the retina or as hair cells in the inner ear, then they would interfere strongly with each other, because their internal compass needles would produce a locally strong magnetic field, which would be felt by the neighboring magnetic cells. Such a proximity would deteriorate the magnetic sense."