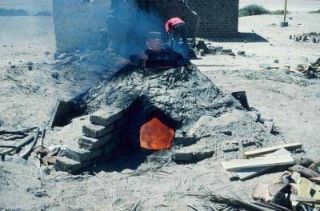 Ancient Egyptians were even more inventive and productive than scholars have thought, according to new findings that depict surprisingly advanced glass-making abilities alongside an industrial complex. The site, at Amarna, is on the banks of the Nile and dates back to the reign of Akhenaten (1352-1336 B.C.), just a few years before the rule of Tutankhamun. Historians have said Egyptians of that time imported their glass. But a team led by archeologist Paul Nicholson of Cardiff University in Wales has reconstructed a 3,000-year-old glass furnace, showing that ancient Egyptian glassmaking methods were much more advanced than thought. The researchers used local sand to produce a glass ingot from their own experimental reconstruction of an ancient furnace near the site. They also discovered that the glassworks was part of an "industrial complex," as they've described it. The site contained a potter’s workshop and facilities for making blue pigment and materials used in architectural inlays. The site was near one of the main temples at Amarna and may have been used to produce materials for state buildings, the researchers figure. "It has been argued that the Egyptians imported their glass and worked it into the artifacts that have been discovered from this time," Nicholson said. "I believe there is now enough evidence to show that skilled craftsmen could make their own glass and were probably involved in a range of other manufacturing industries as well." The findings, announced today, are detailed in the book "Brilliant Things for Akhenaten" (Egypt Exploration Society, 2007).