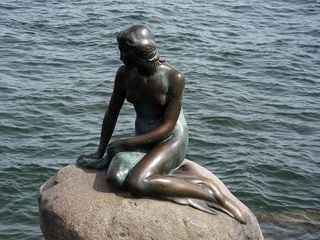 The National Ocean Service's June 27 posting that mermaids don't exist may seem an odd fit for a government agency that focuses on real ocean phenomena. But according to a spokesperson the mermaid posting is just one way to educate people, and perhaps bust some mermaid myths.

The timing of the post seems to coincide with the Animal Planet show "Mermaids: The Body Found," which came out at the end of May and explored whether there is "a kernel of truth that lives beneath the legend of the mythic mermaid," according to the show's description.

Not so, says the National Ocean Service (part of the National Oceanic and Atmospheric Administration, NOAA). "No evidence of aquatic humanoids has ever been found," part of the post reads. Nevertheless, a NOAA spokesperson would not confirm that the post was in direct response to the show, which was presented in documentary format.

The reference to "aquatic humanoids" alludes to a controversial theory called the aquatic ape theory, which suggests humans had an aquatic stage in our evolutionary past. Called "pseudoscience" by anthropologist John Hawks on his blog, this theory is not supported by most scientists.

The Animal Planet summary says its show is "a story about evolutionary possibility grounded in a radical scientific theory – the Aquatic Ape Theory, which claims that humans had an aquatic stage in our evolutionary past."

The mermaids post is part of the Ocean Facts section of the National Ocean Service website to answer inquiries they receive. Since October 2008, they have posted 195 ocean facts items.

"The timing was around that time. I think the TV show came out around Memorial Day and we got a few of the questions [about mermaids]," Keeley Belva, spokesperson for NOAA's National Ocean Service, told LiveScience. "Arguably, yes, the timing is tied to the documentary."

She added, "As we had gotten a couple questions about mermaids, we thought this would be a fun way to talk about it and to have information up about mermaids in different cultures and to draw people into our website and learn more about what NOAA and the National Ocean Service does." [Top 10 Mythical Creatures]

In popular myth, mermaids are half-human, half-fish sirens of the sea. As the ocean facts post points out, they "are legendary sea creatures chronicled in maritime cultures since time immemorial." For instance, Homer wrote of them in the ancient Greek epic "The Odyssey," and in the Far East, mermaids were considered the wives of powerful sea dragons, serving as trusted messengers between the spouses and emperors of the land.

In fact, the scientific grouping Sirenia, which includes manatees and their close relative the dugong comes from mermaid legend. Sailors long ago mistook these large gentle marine mammals for mermaids, or sirens who sang songs to lure ships into rocky shores. Legend has it that Christopher Columbus recorded a sighting of a manatee, saying he was surprised at the not-so-beautiful "mermaid," according to the Dolphin Research Center in Florida.

The aboriginal people of Australia had their own name for mermaids, yawkyawks, which could refer to the sirens' allegedly mesmerizing songs. In fact, as far back as 30,000 years ago when humans were becoming the dominant species of the land, and possibly taking to the seas, they seem to have imagined magical female figures. These figures first appear in cave paintings at the time.

"Half-human creatures, called chimeras, also abound in mythology — in addition to mermaids, there were wise centaurs, wild satyrs, and frightful minotaurs, to name but a few," according to the NOAA Web posting.

Even today, "mermaid" sightings still occur. For instance, in 2009 in the Israeli town of Kiryat Yam, locals and tourists flocked to the coast in hopes of glimpsing an alleged mermaid that resembled a cross between a fish and a young girl; apparently she would only appear at sunset.