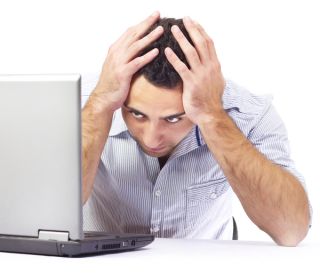 Every time a young man watched pornography over two years, he experienced a headache so severe he had to stop watching, according to a report of his case.

The headache would develop gradually, beginning within the first five minutes of the video, and would reach its most severe point within eight to 10 minutes, according to the neurologists who treated the man, a 24-year-old bachelor in India.

There are two types of "primary headache associated with sexual activity," as the condition is properly called, and it sounds as if this man had the less common type, which progresses slowly along with heightening sexual arousal, Dr. Amy Gelfand, a neurologist at the University of California, San Francisco School of Medicine, said after hearing about the case.

"The more common type is a sudden and severe headache that occurs at orgasm," Gelfand said. The seeming commonness of that headache may simply be due to the fact that people are more likely to bring them to medical attention, frightened by their timing, she added.

Regardless of the type, primary sex headaches are a mystery, Gelfand said  — no one really knows what causes them. Some have speculated that muscle contractions in the neck and jaw during sex may somehow trigger the headaches, while others have suggested they occur because blood vessels in the head are abnormally reactive to sexual activity.

The researchers who treated the man in India suggested his case was caused by changes in the pain-sensing nerves in the face and jaw, along with increased pain sensitivity due to "a heightened emotional state associated with viewing pornography."

Primary sex headaches strike 1 percent of the population at some point in life, and are more common in men, Gelfand said. About half of people who have them also have migraines, but it's not known whether having migraines raises the likelihood of having sex headaches, or vice versa  – or whether other untold factors are behind both.

Previous studies have not suggested any link between the headaches and specific sexual behaviors, the researchers said.

The results of the man's physical and neurological exams were reportedly normal. Gelfand said that is often with the case in people with primary sex headaches. (In fact, if an exam revealed a physical cause of the headaches, then by definition, the person would be instead diagnosed with a "secondary sex headache," she said.)

In most people, the headaches occur over a period of a few months, rather than years, Gelfand said. Patients are often treated with a drug called indomethacin, which is a non-steroidal anti-inflammatory drug available by prescription in the U.S., and is also used to treat other types of headaches.

The case report was published online June 14 in the journal Archives of Sexual Behavior.

Pass it on: Sexual arousal and orgasm can cause headaches in some people, though the reason is uncertain.