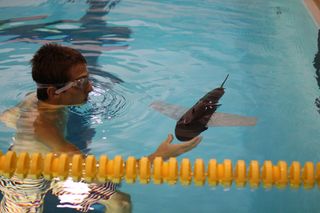 Both freshwater and marine environments are facing constant threats from climate change, industrial pollution and improper waste disposal, among other factors. Monitoring water quality and pollutants is critical to ensuring the health and safety of aquatic and marine ecosystems. Take an oil spill as an example: tracking down (often invisible) oil plumes helps us understand and mitigate a spill’s impact.

Monitoring an underwater environment is not easy. Water conditions vary with time and with location, which calls for pervasive, continuous sampling that is not feasible with fixed sensors. As an associate professor in electrical and computer engineering at Michigan State University, I, Xiaobo Tan, lead an effort to develop robotic fish schools for patrolling water environments (recently featured on Bloomberg TV).

My team works on creating small and inexpensive fish-like robots that carry multiple sensors for monitoring water quality and wireless communication devices. We envision the robots working in a school. These robots will essentially form a mobile-sensing network in water and gather the information of interest in a collaborative and adaptive manner.

So, why fish-like? The hydrodynamic shape minimizes drag and with this shape the robot fish can move through the water using rhythmic body and fin motions. Such movement offers much better maneuverability than propeller-based propulsion, allowing the robots to, for example, turn within a tight radius.  That kind of maneuverability is especially helpful in dealing with the turbulences and currents the robots often encounter.

The robots we’re developing are unique in the sense that they are a hybrid of a robotic fish and an underwater glider. An underwater glider uses the effects of buoyancy to move, and it consumes energy only when changing course. By adopting gliding as a main locomotion mode and tail movement as a maneuvering mechanism, we hope that our robots can work for extended periods on each battery charge. We view this efficiency as crucial if the environmental monitoring industry is going to adopt this technology.

Our research has been supported by several projects funded by the National Science Foundation, including a rapid response grant following the Gulf of Mexico oil spill in 2010.