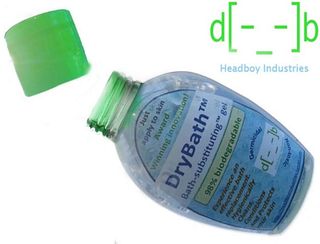 For people who don't have time to bathe or access to fresh water, a South African college student has a solution: a shower gel users simply rub onto their skin. One small packet replaces one bath, and users never need any water. Ludwick Marishane's inspiration was a lazy friend, but his invention will be a boon to people who live in areas where clean water is in short supply.

The gel, called Drybath, kills germs, moisturizes the skin and exudes a pleasant, light smell, unlike hand sanitizers, according to Marishane's website, Headboy Industries. The gel is packaged in small, easy-to-open sachets that were a South African invention.

Marishane got the idea to sell individual packets when he learned from mentors that the world's poorest people buy things in very small quantities, such as one cigarette at a time as opposed to a pack or a carton, he said in a presentation.

In poor communities, Marishane said he sells Drybath for 50 cents a packet, according to an interview with the Global Student Entrepreneur Awards. (Marishane won the competition's top prize in December 2011.) For corporate customers, such as airlines or hotels, each Drybath packet costs $1.50. Marishane donates one packet to charity for every corporate packet sold.

Marishane, who is 22 and attends the University of Cape Town, got his inspiration as a teenager growing up in a rural part of South Africa. He recalled that once, when he nagged a friend to take a shower, his friend replied, "Why doesn't someone invent something you can just put on your skin and avoid the need to bathe?"

"A light bulb went on as I realized that I would be willing to pay money out of my pocket to buy such a product," Marishane said.

He didn't have a computer, so he began Googling using his Internet-enabled basic phone, a technology many people in developing regions have. He soon learned that no one had invented anything similar and that billions of people worldwide don't have access to clean water for bathing, which can lead to disease, he said. Over six months, he searched Google and Wikipedia for ideas for the shower gel's formula. He wrote his business plan all on his cellphone. He now holds the patent and trademark for Drybath. [Rural African Kids Take University Classes on Their Cell Phones]

Marishane wants the company he founded, Headboy Industries, to become a "huge conglomerate" comparable to GE, while developing novel products for the world's poorest people, he said.