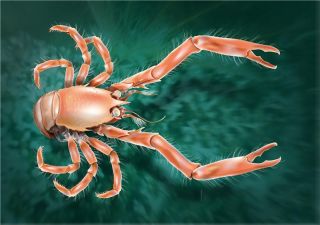 A new species of crustacean has been discovered in the underwater mountains off the northwest coast of Spain, scientists recently announced.

The squat lobster is orange and a little over 2 inches (5 centimeters) long. Squat lobsters are more closely related to porcelain and hermit crabs than true lobsters.

It was discovered at a depth of 4,626 feet (1,410 meters) in August 2011 by the INDEMARES research group and lives among deep corals and sea fans, according to a study published in the March issue of the journal Zootaxa.

The shy crustaceans are abundant in submarine mountains in areas that haven't been heavily fished; the corals and sea fans amid which they live tend to disappear in trawling zones, researchers said in a statement.

Given the scientific name Uroptychus cartesi, the species' closest relative can be found in the Caribbean Sea, and both species likely have a shared ancestor "who invaded the Atlantic from the Pacific and Indian Ocean a few million years ago," said study co-author Enrique Macpherson, a researcher at Spain's Centre for Advanced Studies of Blanes.

The squat lobsters are homebodies and do not spread far, since their larvae spend only a few days in the free-swimming planktonic stage. They feed on smaller crustaceans and particulate matter.

The crustcean is different from other European species mainly because of its shape and the number of thorns on its shell.

Researchers named it after the scientist Joan Cartes, from Barcelona's Institute of Marine Sciences, who was the first to notice that something about these creatures looked different.

The six specimens captured were handed over to Barcelona's Institute of Marine Sciences and the National Museum of Natural History in Paris.