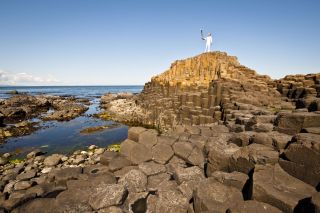 Ever since Olympic basketball gold medalist Sergei Belov's memorable torch run in 1980 at the Moscow Games where he appeared to run over the heads of athletes into Central Lenin Stadium, lighting the Olympic Cauldron has become one of the most anticipated events of the Opening Ceremonies. We've seen the fire lit via bow and flaming arrow (Barcelona, 1992), and from a pool of water (Sydney, 2000).

This year, the relay leading up to the London Games is providing some surprises and adventures as well. On Friday, British adventurer Bear Grylls will fly across the River Tyne on a zip line on the last leg of the day.

He'll land in the parade ground of the Royal Navy's riverside training center for a celebration.

For Grylls, the adventure is rather tame: at the age of 23, he became the youngest Briton to conquer Mount Everest. He starred in the TV series Man vs. Wild on Discovery Channel and Born Survivor on Discovery UK.

Earlier in the relay, TV daredevil Ben Fogle flew the Olympic Flame in a helium-filled balloon above the canopy of the world's biggest indoor rainforest.

Knowing the UK would present extreme weather challenges, experts started testing the technology of the torch in 2010. Engineers from BMW, a major sponsor of the Games, simulated weather conditions in BMW’s Energy and Environment Test Center in Munich. This year's torch is made of aluminum perforated by 8,000 laser-cut circles, representing the torch-bearers. Although there was originally hope that the torch could run on elephant grass, in an effort to promote sustainability, it burns a mixture that is two parts propane and one part butane.

Although the flame has been snuffed out en route to London, it can be quickly relit from the mother flame. And most of the moments thus far have been more celebratory.