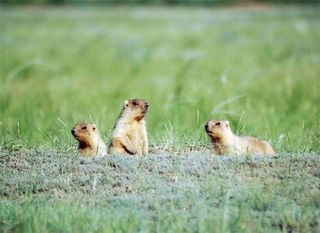 The distressed screams of marmots, like these, shares characteristics with music that can arouse its human listeners, a study indicates.
(Image: © Dreamstime.com)

The Screaming Marmots aren't a rock band, but shrieks of the large rodents are telling scientists something about the animal nature of some music.

Daniel Blumstein, a biologist at the University of California, Los Angeles, studies marmots, a group that includes groundhogs, and he noticed something interesting about their cries.

"The pups sometimes scream when we capture them," said Blumstein, professor and chairman of UCLA's department of ecology and evolutionary biology. "These cries are very different than other vocalizations, like the alarm calls, we've studied."

Now he and colleagues have found evidence that human listeners can be aroused by the characteristics of music that resemble animals' distress calls, such as the marmot pups' screams.

"When we hear music, a lot of the mechanisms in our brain that are helping us understand it are probably originally designed to perceive emotions in voices, so music sort of fulfills that role of being an emotional voice," said study researcher Gregory Bryant, an assistant professor of communication at UCLA.

Bryant and Peter Kaye, a musician at Kingston University in Surrey, England, composed 12 brief clips of otherwise benign-sounding music that incorporated the unpredictable, or nonlinear, characteristics of animal cries. These included sudden shifts in pitch and distortion, similar to the guitar effects common in rock music.

In the natural world, Blumstein said, distortion occurs when a human or mammalian vocal system is overblown – when air is forced rapidly through the vocal system. The effect shows up in the screams of young marmots and many other animals when they are separated from their parents. Adult animals may shriek, too, while being attacked by predators, Blumstein added.

At UCLA, undergraduates who listened to alternating versions of music ranked the ones that contained the distortions as more arousing and more negatively charged than the versions without them. In rock music, this negative valence manifests as aggression, Bryant said.

Sudden shifts in pitch also are associated with animal cries and with emotion in human language, but in this experiment, their effects varied depending on the nature of the shift.

The study built on a previous analysis of movie soundtracks, which noted how horror movies incorporate similar sounds, like screaming and noise, into their soundtracks. [Top 10 Scariest Movies Ever]

In the second part of the current study, the researchers combined their music with boring videos (showing, for example, someone walking or drinking coffee). They found the addition of the video seemed to eliminate the exciting effect of the distorted music. However, the negative emotions associated with the distortion in the music did not go away.

Since humans rely heavily on their vision, the viewers may have discounted the alarm signals in the music when they saw the benign scene in the video, Blumstein said.

In the future, the researchers plan to look at the physiological responses – such as changes in respiration and heart rate – when music contains these sorts of characteristics, Blumstein said.

"I think that composers of music in TV and film have been exploiting these sensitivities without realizing it," Bryant said. "There are natural sounds in the world that arouse us, and somebody who produces music has an intuitive sense of it even if they are not aware of the evolutionary reasons why that may be the case."

The results were published online today (June 12) in the journal Biology Letters.