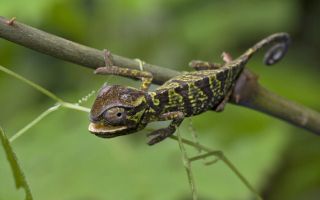 Two species of primates that are of global conservation concern, eight new species of katydids, a critically endangered frog species, 17 rare butterfly species and wild birds such as the brown-cheeked hornbill are among the finds of an expedition to a forest reserve in Ghana.

Scientists exploring one of the largest remaining blocks of tropical forest in Western Africa discovered these animals as part of significant populations of new, rare and threatened species, underscoring the area’s high biological diversity and value.

The findings came from a 2006 expedition to Ghana’s Atewa Range Forest Reserve (Atewa) led by Conservation International’s Rapid Assessment Program and were presented in a report made public Thursday.

--A critically endangered frog species (Conraua derooi) whose presence in Atewa may represent the last viable population in the world.

--An unusually high 22 species of large mammals and six species of primates including two species that are of global conservation concern: Geoffroy’s pied colobus (Colobus vellerosus) and the olive colobus (Procolobus verus).

--17 rare butterfly species, including the magnificent Papilio antimachus, whose wingspan is the widest in the world. Another, called Mylothris atewa, is found nowhere else in the world and has been proposed as globally critically endangered. The new report contains the first photo of this species in the wild;

--19 fish species of significant potential value in the aquarium trade. These species indicate that the streams run through high quality, intact forest, which is becoming exceedingly rare in West Africa.

--The only tree fern species (Cyathea manniana) found in Ghana. Other places where similar species are found include forests in Brazil and Madagascar.

--A strange new species of spider tick, with a lineage dating back to the Age of the Dinosaurs, looks like a cross between a spider and a crab, and males have their reproductive organs on their legs. They are considered quite rare, with only 57 other species known from this group throughout the world.

“While this forest has long been known to harbor a high number of species and to serve as an essential source of water for local villages and for Accra, it is only recently that the global importance of this reserve has been confirmed,” said Okyeame Ampadu-Agyei, an expedition member in Ghana associated with Conservation International, which led the expedition. “We must quickly take action to protect the incredible diversity of Atewa for future generations and to prevent the extinction of the 36 globally threatened species that we know to live in Atewa.”

The reserve's animals and habitats are under pressure from illegal timber harvesting and bushmeat hunting, the researchers said.

From June 6 to June 24, 2006, a team of 22 scientists, post-graduate students and assistants from Ghana and abroad surveyed the 58,472 acre Atewa tract in south-eastern Ghana. The scientists found an intact forest ecosystem, which is unusual and significant for West Africa, where most forests are highly fragmented and disturbed.

Established as a national forest reserve in 1926, and since designated as one of Ghana’s Globally Significant Biodiversity Areas, Atewa’s importance has long been recognized because it contains the headwaters of three river systems, essential sources of domestic, agricultural and industrial water for local communities and many of Ghana’s major population centers, including Accra.

In their final report, scientists called for the government to upgrade the area’s protection status such as to a National Park, create of a buffer zone around the park and develop a management plan that includes conversation measures and economic development strategies compatible with conservation goals.

The report points to eco-tourism as an optimal industry to develop because of Atewa’s beauty, richness in species and close proximity to the capital city.