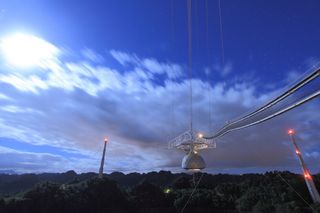 Arecibo observatory, late at night under a full moon and the many stars above.
(Image: © Joshua Brown, University of Vermont)

The Arecibo Observatory in Puerto Rico, supported by the National Science Foundation, has been scanning the heavens for more than aliens since 1963. It is perhaps best known from the film Contact (Warner Bros., 1997) with Jodi Foster or the James Bond film GoldenEye (United Artists, 1995).

Though a great place to film movies, it serves scientific purposes as well. Astronomer Joanna Rankin, of the University of Vermont, uses the telescope as a super-sensitive ear for listening to the faint sounds of a bizarre family of stars called pulsars.

She also brings her students to Arecibo — the largest radio telescope in the world, suspended over a sinkhole in the jungles of Puerto Rico — to "get their hand on the wheel," she said, moving the radio telescope, which weighs more than 800 tonnes (900 tons), to listen in on far-off stars.

The students help her and an international team in their search for one of Albert Einstein's most elusive predictions: Gravitational waves. These predicted gravitational waves are ripples in the fabric of space itself that zip through the universe at the speed of light.

This photograph was taken late at night under a full moon with a 30-second exposure, revealing the telescope's Gregorian dome suspended 450 feet over the 1000-foot-wide reflecting dish below — and many stars above.