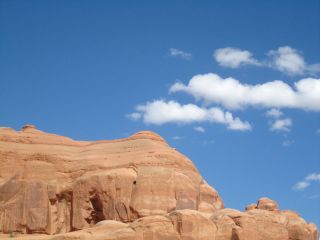 A new study suggests blue skies, like this one shown over Arches National Park in Utah, could become whiter and brighter if a type of climate engineering is carried out.
(Image: © K. Ramsayer)

If scientists were to follow through with a sun-blocking idea for cooling the planet, they may also brighten up your day — literally.

New research found that blocking just 2 percent of the sun's light from hitting our planet, a type of solar geoengineering to combat man-made global warming, would make the skies three to five times brighter and whiter.

Another study, also out this week, suggests that in addition to sky-brightening, such sunlight-reducing geoengineering would disrupt global and regional rainfall patterns.

A type of solar geoengineering, in which sun-scattering aerosols are shot into the atmosphere, mimics a process caused by large volcanic eruptions; such volcanic blasts shoot lots of small particles into the stratosphere that scatter incoming solar energy away from Earth's surface. The catch, however, is that these particles drop out of the skies within a couple of years; with them go their cooling abilities. [Top 10 Craziest Environmental Ideas]

For instance, the volcanic fallout from the 1991 eruption of Mount Pinatubo in the Philippines cooled global temperatures by an average of 0.9 degrees Fahrenheit (0.5 degrees Celsius) over the next year.

And so scientists have considered constantly replenishing a layer of reflective particles in the stratosphere to continue scattering sunlight back to space. In general, the idea of geoengineering the climate to offset man-made global warming is controversial for both its technical feasibility and ethical issues (geoengineering could lull humans into complacency regarding caring for Earth).

In the new study, researchers simulated this process using a computer model. They found that depending on the size of particles — in this case, sulfate-based aerosols — the daytime skies would appear whiter. Sunsets would also show off afterglows.

The skies would also turn a lighter shade of blue. For comparison, the scientists said the world's skies would appear more like those hovering over cities — white and hazy.

"These results give people one more thing to consider before deciding whether we really want to go down this road," study researcher Ben Kravitz of Stanford University's Carnegie Institution of Science, said in a statement, adding that the psychological impacts of these changes to the sky may also be important to consider when thinking about geoengineering.

Kravitz, Ken Caldeira, also of Carnegie, and Douglas MacMartin from the California Institute of Technology detailed their research June 1 in the journal Geophysical Research Letters.