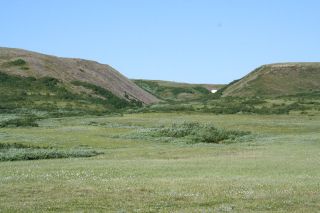 Alder (dark green) and willow (greyish) shrubs grow on the northernmost foothills of the Polar Ural in West Siberia, Russia. An increase in the height of these shrubs has caused problems for the indigenous Nenets who have had to modify their reindeer herding practices.
(Image: © B.C. Forbes)

Tundra is by definition a cold, treeless landscape. But scientists have found that in a part of the Eurasian Arctic, willow and alder shrubs, once stunted by harsh weather, have been growing upward to the height of trees in recent decades.

The reason for the change: the warming Arctic climate, they say.

Roughly 30 years ago, trees were nearly unknown there. Now, 10 percent to 15 percent of the land in the southern part of the northwestern Eurasian tundra, which stretches between Finland and western Siberia, is covered by new tree-size shrubs, which stand higher than 6.6 feet (2 meters), new research indicates.

"What we have found essentially is that the growth of these shrubs is really linked to temperatures," said study researcher Marc Macias-Fauria of Oxford University's Biodiversity Institute. "They are reacting to warming temperatures by growing more."

The change first came to the attention of scientists when nomadic reindeer herdsmen, the indigenous Nenets, said they were losing sight of their reindeer in the new trees, Macias-Fauria said.

Until recently the shrubs common in this part of the Arctic stood at most about 3.3 feet (1 meter) high, too low to obscure a reindeer.

To better understand the climate dynamics associated with the increase in growth in the northwestern Eurasian tundra, he and colleagues studied information from the herdsmen's observations, temperature data, growth rings in the wood of shrubs and satellite data, including observations of the amount of green covering the landscape during the growing season.

They found the shrubs grew most in years with warm Julys.

To determine how much of the land is now covered by the treelike shrubs, they used high-resolution satellite images, verifying what they saw in these with trips out into the field. [Satellites Gallery: Science from Above]

Shrubs are common in the southern parts of treeless tundra regions, giving way to more grasses, lichens and mosses farther north. Harsh Arctic weather generally prevents the shrubs from growing up —"the bigger you are, the more exposed you are to the atmospheric conditions," Macias-Fauria said.

This Eurasian piece of the Arctic is among the mildest Arctic regions, so it may offer a hint as to what is to come in other places, he and his colleagues point out.

Were the treelike shrubs to become widespread, this change could exacerbate global warming through what is known as the albedo effect, he said. When snow falls on the tundra's shrubs, it creates a continuous white blanket that reflects the sun's energy back out into space. Trees, however, rise above the snow, breaking up the white and darkening the land surface. As a result, less energy is reflected back into space and more is absorbed, resulting in warming.

The loss of Arctic white sea ice over dark ocean has a similar effect.

Eventually, it is believed that warming will cause the forest to the south to creep north into what is now tundra. However, that process is expected to take much longer.

This research is detailed online today (June 3) in the journal Nature Climate Change.