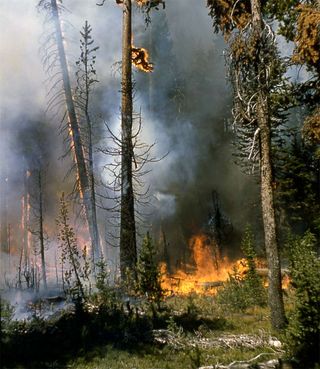 As climate change heats up our planet, scientists foresee more severe wildfires in Yellowstone National Park, a phenomenon that could change the forest ecosystem. (Here, the Lewis Lake fire in Yellowstine in 1939.)
(Image: © R. Robinson, NPS)

The gigantic wildfires that blow through the southwestern United States today are unprecedented in the long-term historical record, new research suggests, and are due to modern human activities.

"The U.S. would not be experiencing massive large-canopy-killing crown fires today if human activities had not begun to suppress the low-severity surface fires that were so common more than a century ago," study researcher Christopher Roos, of Southern Methodist University, said in a statement.

Roos' recent study examined hundreds of years of ancient tree ring and fire data and used this data to construct and analyze a statistical model that encompassing 1,500 years of climate and fire patterns to test whether today's dry, hot climate is causing these megafires, which routinely destroy millions of acres of forest.

The researchers combined previously collected fire data from Ponderosa Pine forests in the southwest United States during the Little Ice Age (from 1600 to the mid-1800s) with climate data derived from existing tree rings to determine the annual fire activity 1,500 years ago.

They discovered that this time period, the Medieval Warm Period, was no different from the Little Ice Age in terms of what drives frequent low-severity surface fires: year-to-year drought patterns.

"It's true that global warming is increasing the magnitude of the droughts we're facing, but droughts were even more severe during the Medieval Warm Period," Roos said. "It turns out that what's driving the frequency of surface fires is having a couple wet years that allow grasses to grow continuously across the forest floor and then a dry year in which they can burn. We found a really strong statistical relationship between two or more wet years followed by a dry year, which produced lots of fires."

The researchers found that even when ancient climates varied from each other — one hotter and drier and the other cooler and wetter — the frequencies of year-to-year weather patterns that drive fire activity were similar. Furthermore, the findings implicate as the increase in megafires is caused not only modern climate change, but also human activity over the last century, the researchers said.

These human activities include livestock grazing and firefighting, which combine to create more dense forests with accumulated fuels that make them more vulnerable than ever to extreme droughts, and these droughts bring on huge wildfires that wreak havoc on even the tops of trees.

In ancient forests, frequent small fires swept the forest floor. These "fires cleaned up the understory, kept it very open, and made it resilient to climate changes because even if there was a really severe drought, there weren't the big explosive fires that burn through the canopy because there were no fuels to take it up there," Roos said. "The trees had adapted to frequent surface fires, and adult trees didn't die from massive fire events because the fires burned on the surface and not in the canopy."

"If anything, what climate change reminds us is that it's pretty urgent that we deal with the structural problems in the forests," Roos said. "The forests may be equipped to handle the climate change, but not in the condition that they're currently in. They haven't been in that condition before."

One answer to today's megafires might be changes in fire management, the researchers said.

The findings were published today in the March issue of the journal The Holocene.