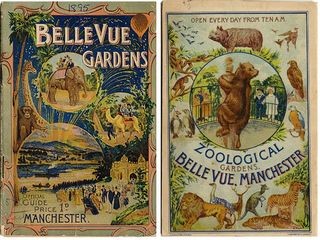 Multi-person elephant rides, orangutans eating from fine china, and carnivores on display before becoming extinct are just some of the scenes from an online exhibit of vintage zoo pamphlets being featured by the Smithsonian Institution.

The pamphlets, photos and zoo maps, available from the Smithsonian Institution Libraries, come from zoos in more than 30 U.S. states and 40 countries. They show elephants in Australia ferrying schoolchildren on their backs, close-up looks at tigers in Prague, and illustrations from 1891 of a thylacine, or Tasmanian tiger, a carnivorous marsupial on display at the Gardens of the Zoological Society of London. The last known thylacine died in captivity in 1936.

The vintage materials reveal how much zoos have changed from amusement-park-like attractions to more educational, conservation-minded institutions. A guide to Great Britain's Clifton Zoological Gardens from 1912, for example, shows prison-like animal enclosures encased in heavy bars. Primates were often posed doing human-like activities. One Minnesota zoo guide from 1928 shows a chimpanzee in a stroller. The New York Zoological Park guide, published in 1905, has photographs of orangutans sitting around a table draped with a white tablecloth, mimicking a family dinner.

"Some of the photographs of animal enclosures, restraint devices and mock theatrics, while unsettling to some, are an important part of the history of human-animal relations," wrote Alvin Hutchinson, the head of information services at Smithsonian Libraries, in an introduction to the collection.

These days zoos are focused increasingly on conservation and research rather than on anthropomorphized chimps. Smithsonian's National Zoo, for example, recently live-tweeted an attempt to artificially inseminate its giant panda Mei Xiang. There are only about 1,600 pandas left in the wild, and captive-breeding programs are part of an effort to save the species.

In turn, zoo residents give researchers a glimpse at the cognitive capabilities of wild animals. Recently, for example, Santino, a chimpanzee at Furuvik Zoo in Sweden, showed evidence of a sneaky streak. The territorial chimp was already known to throw rocks at zoo visitors as part of his dominance displays. (He always missed.) Now scientists have observed Santino hiding his weapons behind logs and boulders in his enclosure, even maintaining an innocent, nonchalant air in order to get closer to visitors before launching his attack. The chimp's behavior shows a capacity to make complex plans, researchers told LiveScience.