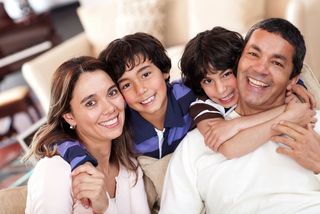 Women's preferences for provider men may have set the stage for the modern family arrangement.
(Image: © Andresr, Shutterstock)

When women started to choose good providers over manly alpha males, they created the idea of the "couple," new research indicates.

The "modern family" is characterized by monogamy and long-term partnership, a phenomenon that replaced relative promiscuity with plenty of competition between males over mates.

When this change happened is up for debate, but ancient human Ardipithecus, at 4.4 million years old, already shows that competition between males had already declined. The development of the family seems to have happened soon after the hominins and chimpanzees split from each other evolutionarily.

Over time, the study suggests, female mate choices changed; couples replaced promiscuity, while low-ranking men, who maybe weren't as strong or manly as alpha males, found a way around the male-on-male competition, by offering their services as long-term companions, rather than just sperm donors. This "sexual revolution," as the researchers called it, laid the foundation for the modern family.

In the new study, Sergey Gavrilets, a researcher at the University of Tennessee, analyzed mathematically how various theories about the development of the modern family would have played out. They show, with that analysis, that none of the previously proposed theories hold up biologically.

Using their modeling data, the researchers suggested that the only biologically feasible way for today's family to evolve would be if females started picking low-ranked males for their ability to take care of the female in a longer-term couplelike relationship (a capability called provisioning). [How Do I Love Thee? Experts Count 8 Ways]

These males spent their time and energy providing for their mates, instead of wasting this energy competing with other males. This gave these low-ranking males a way around traditional alpha-male competition, and if it helped the females raise more, or healthier, children, the trait would be selected for, and females would start to show a preference for these provider-males.

"Once females begin to show preference for being provisioned, the low-ranked males' investment in female provisioning over male-to-male competition pays off," Gavrilets said in a statement. "Once the process was underway, it led to a kind of self-domestication, resulting in a group-living species of provisioning males and faithful females."

When the modern family evolved, Gavrilets says, it gave rise to parenting partnerships and the division of labor, which is important because human children take so long to grow up. While these hominin males may be working their butts off for their ladies, the ladies may still stray, Gavrilets wrote in research detailed Monday, May 28, in the journal Proceedings of the National Academy of Sciences.

"Females are not predicted to become completely faithful, but rather, the level of their faithfulness is expected to be controlled by a balance between selection for better genes (potentially supplied by top-ranked males) and better access for food and care (provided largely by low-ranked males)."