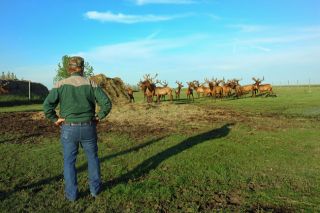 Ranches and other private lands are important in maintaining the biodiversity of America’s West, suggests a new study.

Ranching, which involves raising livestock that graze, requires large swaths of land and alters native vegetation in modest ways, said study author Richard Knight, of Colorado State University. Additionally, the practice ensures that land is not subdivided for other uses, such as development.

The so-called American West technically includes lands west of the 100th meridian—a line of longitude 100 degrees west of the Prime Meridian, extending from the North Pole to the South Pole. In the United States, this line passes through North Dakota, South Dakota, Nebraska, Kansas, Oklahoma and Texas.

“Ranching as a land use supports species of conservation concern and interest more than virtually any other land use in the American West, particularly outdoor recreation and residential development,” Knight told LiveScience.

“Private lands are the most biologically productive lands in the American west, ” Knight said. “They occur at lower elevations, are better watered and have deeper soils than our protected lands (state and federal lands).”

“To support our region's full natural heritage will require that substantial amounts of private lands be kept from residential and commercial development. Many of these private lands are in ranching.”

The study is detailed in this month’s issue of Rangelands.