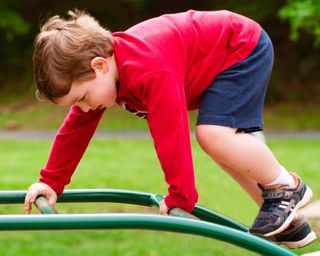 Over the last few years, studies in animals and people with ADHD have shown exercise may reduce impulsivity and improve attention.

The findings suggest exercise could be used as an alternative ADHD treatment, or in combination with medications, experts say.

Researchers emphasize that studies so far have been small, and much more work is needed to validate these results. And we don't yet know what types of exercise, or what amount, might bring a benefit, experts say.

However, the findings raise concerns that taking away recess from kids with ADHD, which is a common form of punishment for acting out in class, might actually fuel more bad behavior, experts say.

"In general, kids who have ADHD need to have their gym class, need to have their recess," said Dr. Melvin Oatis, a child psychiatrist in New York City. Generally, if a teacher knows a child has ADHD, they should use other forms of discipline, such as encouraging good behavior, Oatis said.

Currently, many of those who treat children with ADHD believe exercise is helpful, and some use exercise recommendations as an adjunct to, but not replacement for, medication, Oatis said. The idea is that children with ADHD feel less restless and more focused after they expend some energy, Oatis said. However, Oatis noted that this isn't the case for all children — some kids' energy levels are ramped up after exercise, and they can't settle back down, he said.

Exercise and ADHD medications act on the brain in very similar ways, said Thomas Lenz, an associate pharmacy professor at Creighton University in Omaha, Neb. Both are thought to increase levels of brain chemicals called dopamine and norepinephrine, which help people think, focus and control their actions, Lenz said. An imbalance of these chemicals is thought to contribute to ADHD symptoms, Lenz said.

Researchers have just begun to study exercise as a potential treatment for ADHD.

Recently, Betsy Hoza, a psychology professor at the University of Vermont, and colleagues studied 17 children with ADHD, ages 5 to 8. The kids participated in 30 minutes of moderate-to-vigorous exercise, such as playing tag, before school. After eight weeks, children showed improvements in impulsivity and aggression, and were less likely to interrupt others, Hoza said. In addition, about two-thirds of parents and teachers said the children had improved on the whole after the program.

And David Bucci, an associate professor at Dartmouth College in Hanover, N.H., has shown that rats with a condition similar to ADHD that are allowed to exercise improve in their ability to ignore distracting stimuli, compared with rats that don't exercise.

However, much remains unknown. Studies have not compared exercise with ADHD medications to see if one is more effective than the other, or if the two in combination have an additive benefit, Hoza said. In addition, there may be sex differences in children's responses, which researchers should explore, she said.

It's a common scenario for children with ADHD to have recess taken away as punishment for acting out in class, said Ruth Hughes, clinical psychologist and CEO of Children and Adults with Attention Deficit/Hyperactivity Disorder (CHADD), who often hears from parents about the issue. (CHADD is an ADHD support and advocacy organization.)

"It's very frustrating for parents," Hughes said. "The need for that physical activity is important for these kids. They would behave better if they had a chance to be running around in recess," she said.

Lenz likened taking away recess from kids with ADHD to taking away food from a person with low blood sugar who has become irritable. The food, just like the recess, is what is needed to improve symptoms.

"You're actually just pulling away the treatment they need to make that behavior become more in line," Lenz said.

However, Oatis, the child psychiatrist from New York, said, for some children, taking away recess might motivate kids to change their behavior. And because children with ADHD can have other mental health issues, including anxiety, bad behavior in class may not necessarily be a result of their ADHD. "[It's] not a one-size-fits-all," Oatis said.

One of the best ways to help kids with ADHD behave better is to recognize and reward good behavior, Hughes said. "Find your kid doing something right, and make an example of it," she said.

Pass it on: Preliminary work suggests exercise improves symptoms of ADHD. In general, teachers should not take away recess from children with ADHD because the kids need it, experts say.