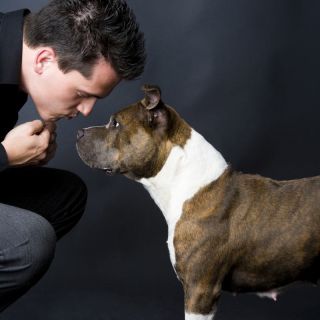 Would you rather own a domineering pit bull or a loving Labrador? The answer may say a lot about your personality.

New research, detailed last week in the journal Anthrozoos, finds that people with argumentative personalities are more likely to choose bull terriers and other aggressive dogs than their agreeable counterparts.

The finding, along with other research, suggests the dog breeds we choose act as mirrors for ourselves. For instance, research presented in April at the British Psychological Society Annual Conferencesuggested individuals who own toy dogs (Paris Hilton and Isaac Newton to name a couple) are more likely to be open to new experiences, a trait called openness.

Meanwhile, owners of famously friendly dogs, like retrievers, are likely to be the most agreeable personalities around. [See What Your Dog Says About You]

Your dog and you

In the new study, 235 adults, ages 15 to 64, indicated their preference for different dog breeds and also filled out personality tests, among other questionnaires.

Dogs were independently rated on their perceived aggressiveness, with terriers thought of as the most aggressive, followed by boxers; retrievers and cocker spaniels were rated as the least aggressive.

"We did not include the American pit bull, which I know is of concern in the U.S., as the Staffordshire bull terrier is essentially equivalent and similarly reputationed," Vincent Egan, a psychologist at the University of Leicester, told LiveScience.

Results showed the participants who scored lowest on agreeableness — someone who is less concerned with others' well-being and perhaps more suspicious, unfriendly and competitive — were more likely than others to prefer an aggressive dog.

However, that same preference didn't bear out a common bad-boy image (picture guy walking down the street with a stud-collared pit bull); results showed no link between pit-bull preferences and delinquent behavior. Nor did they find that a liking of aggressive dogs was linked to wanting to show off in front of romantic partners.

"This type of study is important, as it shows assumptions are not the whole picture. It is assumed owners of aggressive dogs, or dogs perceived as aggressive, are antisocial show-offs," Egan said.

The researchers also found a slight link between a person's conscientiousness and preference for aggressive dog types. "These results with conscientiousness were unexpected, but the effect is a small one, and needs to be repeated in a different group of people," Egan said.

A more affectionate dog may also reflect on a person's demeanor. "Liking a pedigree Labrador or a clipped poodle may be as much a statement as having a pit bull with a studded collar," Egan said.

Egan sees a direct link between dog preference and owner personality, he said.

"I think that given a choice, people select things they like," Egan said. "Choosing to have an aggressive dog is due to the person making the choice; the dog is not foisted on you."

He added, "If a dog is selected as a symbol of intimidation and a possible weapon, it is not being selected as a companion, or a playmate."