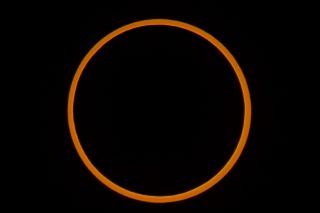 California photographer Phil McGrew captured this image of the moon covering the sun's face from Pyramid Lake, Nevada. The solar eclipse occurred May 20, 2012, and was visible over much of the western U.S.
(Image: © Phil McGrew)

A California photographer captured this perfect "Ring of Fire" image of the May 20 solar eclipse from the Nevada desert.

The eclipse was visible Sunday in the western United States, but only skywatchers on the sun's central path got a view of the solar annulus, or the symmetrical ring of sun peeking out around the body of the moon. San Francisco currency trader and amateur photographer Phil McGrew was one of the lucky few.

"Myself and a few friends have been obsessing over this eclipse since January," McGrew told LiveScience.

McGrew and his friends weren't interested in settling for the "crescent sun" look that the eclipse would take on in San Francisco. To reach the eclipse's central path, they travelled five hours east to Pyramid Lake in Nevada. There, they figured, they'd have the best chance for good weather.

"There were a few low clouds but they offered very little interference," McGrew said. "The hardest part was simply keeping the sun nearly centered in the camera."

Other areas didn't have so much luck with eclipse weather. In Boulder, Colo., where astronomers organized a massive eclipse-viewing party, clouds obscured the sun during much of the event — though the sun broke through just before the eclipse reached its maximum, with 86 percent of the sun's face covered.

Sunday's event was an annular solar eclipse, in which the moon passes between the sun and Earth. Because the moon's orbit is elliptical and the moon is currently far out on this orbit, the moon looks smaller than usual and can't block the sun's face entirely. For viewers along the central path of the most recent eclipse, a maximum of 94 percent of the sun's face was covered. Everyone outside this path saw varying magnitudes of partial eclipse.

Sunday's eclipse was the best chance to see this astronomy phenomenon in 2012; the next solar eclipse will occur on Nov. 13, 2012, but will only be visible over the Pacific Ocean, with only a few minutes of sunrise eclipse visible to some residents in northern Australia.

U.S. residents can look forward to Aug. 21, 2017, the next time a total solar eclipse will be visible from North America. That eclipse will travel an approximately 125-mile (200 km) -wide path from northern Oregon through Wyoming, Tennessee and South Carolina.