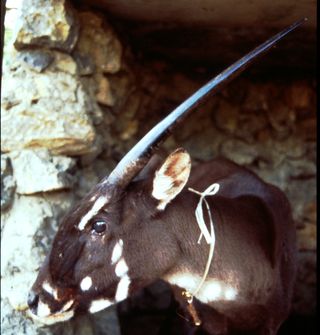 This month marks the 20th anniversary of a spectacular day for zoologists. Two decades ago, in May 1992, scientists announced the discovery of a new species — the saola — living in the lush mountain forests that straddle the Vietnam-Laos border.

It was the first large mammal discovered since the 1930s.

Yet celebrations are muted in light of the elusive species' plight; the saola, also known as the "Asian unicorn," is likely fast disappearing, conservationists warned in an announcement today, and they say there could be only 200, or even as few as just several dozen of the animals left on the planet.

The saola is a small, horned animal that resembles a strange antelope hybrid, but is more closely related to a type of wild cow.

Vietnamese scientists first identified the new species only through the bizarre, horned skulls that villagers living near the animal's range had collected.

Stark markings on the face, long, graceful horns and a tufted tail lend to the animal's mystique. [See rare photos of saola.]

But according to Barney Long, an Asian species expert for the conservation organization WWF, the creature got its mythical moniker more for its habits than its looks.

"It's so rare to see that it would almost be like seeing a unicorn," Long told OurAmazingPlanet in 2011, when a protected area for saola was created in Vietnam.

These secretive ungulates wander the steamy green forests of South Asia's Annamite Mountains, where poaching is rampant. Although saola themselves are not prized in the wildlife trade or for their meat, many of their neighbors are.

"Saola are caught largely as bycatch — like the tuna and dolphin scenario," William Robichaud, coordinator of the Saola Working Group, said in a statement.

And although the rare creatures are caught and killed by snares, scientists have never observed them in the wild. The rare saola that has been captured alive has quickly died.

"When they're in captivity, they seem to act extremely tame, and they're very open to having people come up to them and touch them," Long said, but explained that their sweet demeanor is likely a sign of extreme stress. "The animal is freaking out," he said.

Conservationists said it's encouraging that saola are not a direct target for poachers, and offered hope that the critically endangered animals can be saved.

"But we still need to act," Robichaud said. "One of the rarest and most distinctive large animals in the world has been quietly slipping toward extinction through complacency."