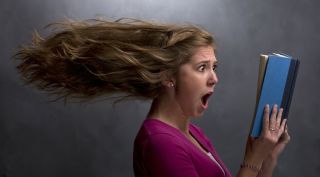 The study finds that 20 percent of bestselling teen books — usually those geared toward older teens — contain language that is generally taboo on television. About 88 percent of the top 40 books contained some sort of profane language as of summer 2008, researchers report Friday (May 18) in the journal Mass Communication and Society.

Some of this language is mild, such as "damn." And only 11 percent of books geared toward 9- to 11-year-olds had any profanity at all. That number rose to 43 percent in books for 12- to 13-year-olds and to 46 percent in books for kids 14 and up. In about half of instances, the profanity was relatively mild, but in 20 percent of cases it was one of the "seven dirty words" made famous by comedian George Carlin in 1972.

"If these were movies, they would automatically be rated R," study researcher Sarah Coyne of Brigham Young University told LiveScience. "But yet the fact that it was in a book makes it acceptable for a 13-year-old or a 14-year-old." [7 Thoughts That Are Bad For You]

Coyne was quick to add that she doesn't advocate for censorship.

"I am not for banning books in the slightest, I'm just about empowering parents and readers," she said. Book covers don't include any information about what profanity might be inside, she added.

Coyne's earlier work used the New York Times bestseller list from June and July 2008 and found that sex and violence are prevalent in lots of teen lit. Using the same top 40 bestsellers, they combed the books for instances of profanity.

Of the characters who do swear in teen books, the ones who do so the most tend to be popular, physically attractive and rich, the researchers find. That could be a problem, they write, as teens might be more likely to emulate these characters.

That is a big "might," however — there's little to no research on how likely teens are to pick up swearing from their reading materials. Coyne's earlier research has found that exposure to bad words from television and movies makes teens more likely to swear themselves.

Assuming a reading rate of 217 to 289 words per minute, which is average, someone reading teen books would come across about 6.7 instances of profanity per hour. That's still less than the 12.5 instances someone would come across watching television, but books do seem to contain more swearing than video games. Only 34 percent of teen-rated video games contain swearing, the researchers wrote, perhaps because there are fewer words in general in video games versus books.

No matter a parent's opinion on swearing, the advice for Mom and Dad is simply to know what your kid is reading, Coyne said. She recommends the website commonsensemedia.org, which gives brief summaries of what can be found in television, books and some movies.

"Another easy thing is to just talk about what your kids are reading and what's in he books, good and bad," Coyne said. "I think that's a great conversation to have."