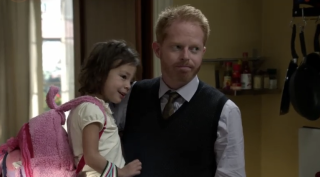 "Modern Family" toddler Lily, who will drop a bleeped-out f-bomb in an upcoming episode, held by her TV dad Mitch in the December episode "When Good Kids Go Bad."
(Image: © ABC)

Bleeped-out swearing may be okay for adults on TV, but what about kids? The ABC show "Modern Family" is about to find out by airing an episode this week about a foul-mouthed 2-year-old.

The show's theme already has critics at the anti-indecency Parents Television Council grumbling, but researchers who study cursing find that believe it or not, 2 years is about the age when kids really start to use "adult" language.

"Yes, 2-year-olds say f---," said Timothy Jay, a psychologist who studies psycholinguistics and obscenities at the Massachusetts College of Liberal Arts. "Preschoolers are pretty well-versed in the lexicon, and by 11 to 12, we are looking at adult swearing patterns."

The obscenity colloquially known as the "f-bomb" will drop from toddler Lily's mouth on Wednesday's (Jan. 18) episode of "Modern Family." The storyline centers around Lily's parents, Cam and Mitchell, who are trying to clean up their daughter's language before she appears as a flower girl at an upcoming wedding. (The obscenity will be bleeped.)

While the director of communications and public education at the Parents Television Council told FoxNews that the storyline is "in poor taste," it may hit close to home for many parents today. [10 Tips for Raising Happy Kids]

Jay and his colleagues have a dataset stretching back into the 1970s of words that schoolteachers, day care workers and other adults who work with children report hearing. Kids mimic words early on and pick up quickly on which words are "bad," even if they don't know the exact definitions of those words, Jay said.

Profanity and the brain

In fact, studies suggest that swearing is firmly embedded in the brain. Swearing is a form of "formulaic language," said Diana Van Lancker Sidtis, a professor of communicative sciences and disorders at New York University. These are expressions such as "You bet!" that frequently appear in conversation, and kids learn them as they're learning how to piece together sentences.

Not only does swearing start early, it's hard to dislodge. Stroke victims and people with brain injuries often remember how to swear even when other words elude them, according to a 1999 review by Van Lancker Sidtis in the journal Brain Research Reviews.

The emotional component of swear words may be what makes them stick, according to the review. Because these emotional words are processed differently in the brain, they may remain when other speech patterns are ravaged.

The volunteers who were swearing a blue streak kept their hands submerged longer than the other participants, suggesting the profanity helped them cope with pain. It's possible that swearing increases aggression and thus pain tolerance, study researcher Richard Stephens of Keele University told LiveScience at the time.

Swearing also serves a purpose of expressing emotion more deeply, succinctly and cathartically than any other type of speech, Jay said. But this positive side of swearing gets little attention, he said.

"A lot of people don't realize that swearing represents an evolutionary leap, in that it allows us to be verbally aggressive without being physically aggressive," Jay said. [10 Most Destructive Human Behaviors]

The positive aspects of profanity aside, parents may wince at a 3-year-old swearing like a sailor — especially because children don't fully understand the social nuances of when and where swearing gets a pass until they are teens, according to Jay.

Choosing to have TV toddler Lily say the f-word, bleeped or not, is likely to elicit the most discomfort possible for viewers, at least according to a January 2011 paper published in the journal Mass Communication and Society. That research surveyed 500 college students and found that sexually suggestive words were rated as the most offensive, with excretory language coming in second and religious blasphemy bringing up the rear. The students also reported that swear words are most offensive on broadcast television, which would include ABC, the channel that hosts "Modern Family."

Broadcast television is currently under fire, with an ongoing Supreme Court case determining whether the Federal Communications Commission breaks the First Amendment by penalizing broadcasters for brief nudity and fleeting expletives. A previous Supreme Court case, FCC v. Pacifica in 1978, cited children's exposure to television as a reason to uphold indecency laws.

But it's not "Modern Family" or even famously profanity-laced, bleep-free shows like HBO's "The Sopranos" or "Deadwood" that teach kids to swear, Jay said. Those lessons come from closer to home.

"Little kids are like language vacuum cleaners," he added.