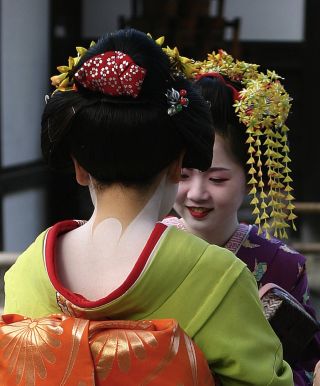 Vidal Sassoon, the hairstylist credited with ushering out stiff-and-stuffy styles and bringing in short, geometric cuts, died at his home on May 9. But Sassoon's styles weren't the only ones that defined an era.

Hairstyles have long been signifiers of culture, religion and values. Here are a 10 iconic styles and their history.

In her 1963 role as the Cleopatra, actress Elizabeth Taylor forever cemented a vision of the Egyptian queen in pop culture, complete with a shoulder-length black bob adorned with gold. In fact, contemporary portraits of Cleopatra on coins reveal curls gathered into a braid or a bun on the back of her head. Cleopatra was a Ptolemy, a Macedonian dynasty. She likely had dark hair, according to "Cleopatra: A Life," a biography by Stacy Schiff (Little, Brown and Company, 2010), and her skin was likely "honey-colored," a term used to describe the complexions of several of her relatives.

Ancient Egyptian hairstyles varied throughout the history of the kingdom, but hairstyling tools and wigs found in tombs suggest that style was paramount across the centuries. Starting during the 18th Dynasty, which began around 1150 B.C., paintings show Egyptian men and women socializing with cone-shaped objects on the tops of their heads. These "cosmetic cones" were likely made of wax or animal fat mixed with perfumes, and would have given off sweet scents in the hot Egyptian climate.  [Gallery: Amazing Egyptian Discoveries]

Speaking of royalty, Merovingian king Chlodio's style was so iconic in its day that he was known as "the Long-Haired King." The Merovingians ruled the Franks in much of what is now France and northern Italy beginning in the fifth century. Chlodio was born around A.D. 395 and lived for 50 years, battling the Romans for territory. As a sign of status, he and other Merovingian royalty wore their hair long. According to legend, Chlodio got his nickname because he took this tradition further than earlier rulers, letting his tresses really flow. [Photos of Iconic Hairdos]

Today, Japanese geisha wear their hair in a traditional style that first arose in the 1600s. The shimada hairstyle consists of long hair looped into a chignon in the back and fastened with combs. In the Edo period of the 17th century, when these styles first arose, women got creative with the shapes and styles of these topknots, waxing out their hair to the side to frame their faces and decorating their tresses with ribbons and decorative hair sticks. Today, geisha wear different shimada styles depending on their rank. A high chignon is usually worn by young women, for example, while only maiko, or apprentice geisha, can wear the "split peach" style bun, a round style split by a colorful ribbon.

The conical "fairy princess" hats beloved by preschool girls today have their roots in real Medieval style. The "hennin," as this style is now known, came into fashion among aristocratic women in France, Europe and other European kingdoms in the 1400s. This was an era of hats, veils and hoods for both men and women, and the conical hennin combined two out of three, usually consisting of a light conical hat draped with a semi-transparent veil. Though some medieval art shows the hennin worn over loose hair, women generally bundled their hair up tight into their head coverings, even plucking their hairlines to prevent flyaways from showing. [Gallery: Medieval Art]

You can tell an Orthodox Jewish man by his peyos, or the curly sidelocks. This hairstyle is worn in response to a commandment in the Torah forbidding the cutting of the hair on the sides of the head. According to Ohr Somayach Tanenbaum College in Israel, the forelocks may symbolize the metaphorical separation between the front, intellectual part of the brain and the physical, sensory back part. Other interpretations suggest peyos were a way for Jewish men to differentiate themselves from "heathens." Different sects have different rules on peyos, from never cutting the hair at all to cutting it but leaving a few long strands to be tucked behind the ear.

These days, cornrows are associated with 1990s hip-hop and American tourists just back from a Caribbean vacation. But these tight, sometimes elaborate braids have a long history. Rock art dating as far back to 3500 B.C. in Algeria shows African women wearing their hair in what appears to be cornrows, and ancient Greek and Roman art likewise depicts these braids.

Why rely on your own hair when a wig could look so much better? Wigs go way back to ancient times, but they really took off in 17th-century Europe. (It helped that they were easier to get lice out of than real hair.) Take Louis XIV of France, who wore massive, curly wigs, or Queen Elizabeth I of England, who donned a red hairpiece. In the 1700s, powdered wigs gave men that distinguished white-haired look.

By the 1800s, wig-wearing was passé, but fake hair never goes out of style. Women of the Edwardian era of the early 1900s wore elaborate pompadour styles, filling in gaps in their natural hair with fake hunks of hair styled in curls or braids. Styles became more austere during the World War I era, but hair extensions and weaves made their way into celebrity culture by the 1950s and trickled down to the fashion-conscious average Jane by the 1970s.

Military men know this hairstyle well. The high-and-tight consists of nearly shaven sides transitioning to a slightly longer cut at the top of the head. It's this style that gives the U.S. Marine Corps the nickname "jarheads."

The high-and-tight is a variation on the buzz cut or crew cut, which first arose in the military as a way to keep lice at bay.

Lice are less of a problem today, but a shaved head is easy to maintain and keeps soldiers cool. The cut also gave new recruits a military uniformity, branding them as members of the tribe — and illustrating the symbolic value we give haircuts. In his book "The Real Insider's Guide to Military Basic Training: A Recruit's Guide of Important Secrets and Hints to Successfully Complete Boot Camp" (Universal Publishers, 2002), author Peter Thompson explains the reasoning.

"The military shaves your head to vividly demonstrate its authority over you and to make all recruits the same," Thompson writes. "Everyone starts training as a 'new' person." [The 10 Most Outrageous Military Experiments]

The beehive is one of those rare hairstyles that actually has an inventor. In 1960, a stylist named Margaret Vinci Heldt invented this piled-high style in response to a request from Modern Beauty Salon magazine to come up with something really different. Heldt turned to a velvet fez she owned for inspiration and came up with the backcombed, hair-spray heavy beehive style. It became a 1960s sensation, loved by women because it was easy to maintain in the days between weekly salon visits.

The bob cut, consisting of a straight cut around jaw level with bangs at the front, was marginally popular before World War I, even as Edwardian ladies shoved extra curls into their enormous bouffant styles. The short style really came into its own as sign of rebellion in the 1920s, when flappers eschewed tradition for trendy short cuts.

The style fell from popularity starting in the 1930s and remained on the fringe (no pun intended) until Vidal Sassoon brought it back in the 1960s.