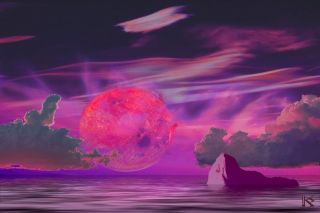 Artist's impression of sunrise from the surface of Gilese 581c, an Earthlike planet in the habitable zone of its red dwarf star.
(Image: © Karen Wehrstein)

A new estimate of the number of habitable planets orbiting the most common type of stars in our galaxy could have huge consequences for the search for life.

According to a recent study, tens of billions of planets around red dwarfs are likely capable of containing liquid water, dramatically increasing the potential to find signs of life somewhere other than Earth.

Red dwarfs are stars that are fainter, cooler and less massive than the sun. These stars, which typically also live longer than Class G stars like the sun, are thought to make up about 80 percent of the stars in the Milky Way, astronomers have said.

Red dwarfs generally have not been considered viable candidates for hosting habitable planets. Since red dwarfs are small and dim, the habitable zone surrounding them — the region where an orbiting planet's surface water can remain liquid — is relatively close to them.

"The habitable zone would be very, very small. Consequently, the chances that you would actually find any planet at the right distance from the sun to be attractive to life was likely to be small, too," said Seth Shostak, a senior astronomer at the Search for Extraterrestrial Intelligence Institute in Mountain View, Calif. [The Strangest Alien Planets]

But the study, based on data from the European Space Agency's HARPS spectrograph in Chile, used a sample of 102 red dwarfs to estimate that 41 percent of the dim stars might be hiding planets in their habitable zone.

"The number of habitats might increase by a factor of 8 or 10," Shostak told SPACE.com.

One of the largest concerns about planets circling red dwarfs is radiation. A red dwarf's habitable zone is generally closer to it than Mercury is to our sun, so a planet there would receive a strong shock of particles when storms erupted on the red dwarf.

"They could essentially give everything on the surface that's exposed to the sky ... a heavy dose of radiation," Shostak said. "It could be fatal."

However, if the alien planet had a magnetic field, this could provide some protection. So, too, could an ocean of water. Life that evolved beneath an ocean might be shielded from the brunt of the radiation.

(That's not necessarily good news for SETI, which searches for signals from extraterrestrial life. "We're not sure intelligent life, if under water, will be building radio transmitters and we're going to hear from them," Shostak said. "But it's possible.")

Another problem with planets tightly bound to their host star is a phenomenon known as tidal locking, in which one side of the world is perpetually turned toward the sun and receiving almost all of the heat.

But this isn't considered as big of a problem now as it had been.

For one thing, research over the past few years has indicated that the presence of other planets can ease the grip of the parent star, keeping a planet from being perfectly stagnant.

"Clearly, if it's too cold on one side and too hot on the other, somewhere in the middle there's that lovely Goldilocks zone where everybody wants to build their condos," Shostak said.

Even with these challenges, the sheer influx of tens of billions of potentially habitable planets improves the chances of finding alien life.

"SETI is looking for Mr. Right or maybe Ms. Right, depending on your point of view," Shostak said. "It helps to find out that there's 10 times as many candidates as there were before."