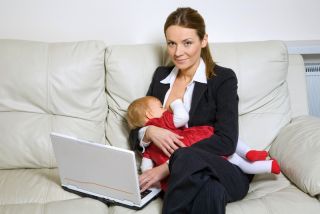 Breast-feeding is recommended for a minimum of the first six months of a baby's life for the health benefits. But new research suggests that breast-feeding may come with a cost: a hit to mom's earnings in the long term.

"Lots of studies before us have shown that women who work are less likely to breast-feed," study researcher Phyllis Rippeyoung, a sociologist at Acadia University in Nova Scotia, told LiveScience. "It really demonstrates that at least as work is organized right now in the U.S., there does seem to be an incompatibility between breast-feeding for a long duration and working for many women."

Many pediatricians recommend that babies be breast-fed for the first six months of life, with the American Association of Pediatrics encouraging breast-feeding for one year. The World Health Organization recommends that women continue breast-feeding to complement other foods until the baby is 2. [Top 10 Warrior Moms in History]

The fact the breast milk is free is often used to promote breast-feeding, Rippeyoung said. But breast-feeding is time-intensive, and many working moms find little support for continuing to breast-feed, research has shown. Until the 2010 Patient Protection and Affordable Care Act, there were no federal protections for lactating mothers, and even that act only requires unpaid breaks for breast-pumping and a non-bathroom space in which to do so.

As of 2007, about 75 percent of American mothers started out breast-feeding, but only 43 percent of women breast-feed for at least six months. Given the known difficulties of working while breast-feeding, Rippeyoung and her colleague Mary Noonan, a sociologist at the University of Iowa, wanted to find out how these feeding choices would influence women's earning potential.

They used data from the National Longitudinal Survey of Youth, a long-term survey that included interviews with American women from 1979 to 1994. The researchers took data from 1,313 women who had their first child between 1980 and 1993, were employed before having their baby and didn't have multiple births.

The results of steep earning declines in long-duration breast-feeders held even after controlling for factors such as age, immigration status, race, region of the country, education, marital status and number of subsequent kids.

The researchers' analysis compared changes among women, so it's not easy to give a simple percentage of income lost per feeding choice. Some of the numbers give a taste, however. The year before the birth of their child, long-duration breast-feeding moms earned, on average, $20,957 a year in 2000 dollars, compared with the $16,790 earned by formula-feeders and the $21,602 per year earned by women who would end up breast-feeding for less than six months.

"I didn't think it would be so stark," Noonan told LiveScience.

Breast-feeding and the workplace

When hours worked and employment status were taken into account, differences between mothers disappeared. That suggests that the reason long-term breast-feeding moms earn less is that they work less. What the study doesn't reveal is why this is the case. Moms who plan to breast-feed long-term might also plan to leave the workforce from the beginning, Rippeyoung said. Or moms who breast-feed long-term might find their workplaces unsupportive and get pushed out of the workforce. [5 Myths About Women's Bodies]

The practice of breast-feeding is very stratified, Noonan said. Women who breast-feed for the long-term are on average wealthier, more educated and less likely to be minorities than women who don't. The current study found that the husbands of women who chose to breast-feed longer were higher-earners than husbands of non-breast-feeders.

"All signs kind of point to this idea that this intensive mothering is only something that women who can afford to are able to do," Noonan said.

Noonan and Rippeyoung said they were not interested in telling women how to feed their babies. Rather, their message is for public-health experts and other policymakers who would like to promote the health benefits of breast-feeding.

"A lot of the emphasis on breast-feeding is to get women to have the sense that this is what they should be doing, without putting anything in place to make it workable," Rippeyoung said. "It's like, 'Do this, do this, you're doing a bad thing if you don't — but you'd better figure it out on your own.'"

Family-friendly workplace offerings like onsite daycare or paid maternity leave could make a big difference for women who are trying to juggle their baby's needs with the need for income, Rippeyoung said.

"I hope that people don't take this as an inevitable fact of life, because I think there is a lot of room for change," she said. "We really need to think creatively as a society about what are the benefits we're reaping from the actions we're asking of women, and what are we doing to support women in that way?"