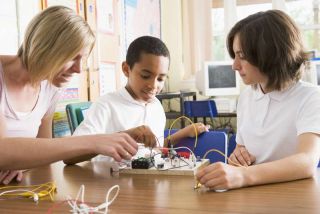 Talking to girls about the lack of females in physics fields may be the best way to nudge them in that direction, research suggests.
(Image: © Monkey Business Images | Shutterstock)

ATLANTA — Many of the strategies teachers have been using to encourage girls to pursue careers in physics aren't working, according to new research.

A new study examined the effectiveness of five ways high-school science teachers have tried to nudge female students toward physics careers, and found that four of them had no effect. Only one — an actual discussion in class about women's underrepresentation in physics — proved successful, researchers reported Monday (April 2) here at the April 2012 meeting of the American Physics Society.

Women receive only about 19 percent of the U.S. physics doctorate degrees awarded every year, and make up an even smaller proportion of all physics faculty members.

In an effort to understand how to increase the representation of women, Zahra Hazari, a professor of engineering and science education at Clemson University in South Carolina, decided to test popular hypotheses about what works.

"There's a general disempowerment in physics," Hazari said during a presentation of her findings. "Students perceive physics to be difficult. They have perceptions of it being close-ended. They perceive it as being unpleasant, and they perceive it to be masculine. It probably affects the level of gender participation." [5 Myths About Girls, Math and Science]

Hazari and her colleagues usedsurveys collected from 7,505 students at 40 colleges and universities around the country as part of the Persistence Research in Science and Engineering (PRiSE) project. The scientists examined five possible factors, including whether girls took physics in single-sex classes, whether they had a female physics teacher, whether female scientist guest speakers visited their physics classes, and whether their classes included discussions of the work of female scientists or discussions of women's underrepresentation in physics.

"There are lots of causes and hypothesized solutions for these causes that are prevalent in our mythology," Hazari said. "Basically our mythology around what helps girls is not necessarily true, and we have to be a little bit smarter finding evidence. The one factor we did find was that explicitly discussing underrepresentation had a significant positive effect on females' choice of a physical science career."

Hazai said it wasn't clear why that one strategy proved to be effective, but she guessed that it might be because such a conversation made the issue personal for girls.

"Showing them a picture of somebody doesn't make them want to do it themselves," Hazari said. "But this process of discussing underrepresentation may prompt female students to reassess their own biases, thereby influencing a change. It's really about having more meaningful discussions with them about these issues."

One of Hazari's colleagues at Clemson University, Geoff Potvin, presented related research on physics careers, which found that for men, completing their doctoral degrees more quickly correlated with higher salaries. No such relationship existed for women physicists, who generally make less money than male physicists.

The researchers have no data to explain the discrepancy, and Potvin said it was an open question.

"What I think happens, is men who finish fast believe [in] themselves, and get told and get viewed as being hotshots," Potvin said. "And so then potential employers get excited, the advisers of those students get excited and think, 'Well, I've got this hotshot, I'm going to find him the best job I can.' And all that just doesn't happen for women. That's my feeling."

Ultimately, he said the lack of women in physics has consequences both for the individuals, and for society.

"From the point of view of social good, I think that it's a real missed opportunity to broaden and diversify the idea pool in science," Potvin told LiveScience."If you're systematically missing a group of people, then you're not getting their voices and their ideas. I strongly feel it weakens the quality of science."

The underrepresentation issue also extends to race, he added, saying that African American, Hispanic and Native American students represent only about 10 percent of people receiving physics bachelor's degrees, and only about 6 percent of physics Ph.D.s.

"There's a systematic loss of people who are a growing fraction of the U.S. population, and that has got to translate, in ways that are difficult to measure, into fewer ideas and ultimately less science," Potvin said.