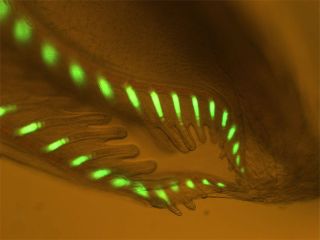 As if tiny flashlights were hidden inside its body, a fish-like creature emits fluorescent flecks, a flashing ability previously considered unique to jellyfish and corals.

Researchers found that the bodies of amphioxus, also called lancelets, contain green fluorescent proteins that could act as a sunscreen or stress shield that protects the animals from environmental changes.

The finding, detailed in the October issue of the journal Biological Bulletin, suggests fluorescence (not to be confused with bioluminescence) might be more prevalent across the animal kingdom than previously thought.

While light-emitters in the animal world span organismal classifications and comprise a slew of clever tricks, not all of these are considered fluorescence.

For instance, many deep-sea fish such as the viperfish and anglerfish are able to bioluminesce, the result of chemical reactions that release energy in the form of light. Another form of light emission seen in certain minerals is called phosphorescence, a process in which energy is absorbed by a substance and then released slowly in the form of light. Fluorescence occurs when light is absorbed at one wavelength and then re-emitted at another nearly immediately.

The lancelets provide a unique example of a group of organisms with fluorescent ability. Found in coastal areas, lancelets burrow in the ocean sand and leave only their head exposed to the flowing currents.

Amphioxus showed up early in evolutionary history and is placed at the base of the phylum Chordata, a group of animals distinguished partially by having a notochord, which is a stiff rod that supports the body during locomotion. The chordates include the primitive hagfishes as well as modern sharks.

Dimitri Deheyn of the Scripps Institution of Oceanography in La Jolla, Calif., discovered the fluorescent proteins after analyzing under blue light several specimens of amphioxus that had been collected in Florida. Further analyses by Deheyn and colleagues of the Florida specimens, as well as similar species from France and Japan, revealed how the fluorescence spreads along the animal’s body and how it fluoresces at different stages of development.

"When I put the specimens under the blue light (used for evoking fluorescence), every single amphioxus had a bright green area in the anterior that was fluorescent," Deheyn said.

The proteins were most similar to those found in corals, which the researchers say is interesting because the two animal groups are separated by billions of years of evolution.

The finding indicates the fluorescence ability was preserved and so must play some important ecological function, Deheyn said.

For amphioxus, the researchers speculate the green fluorescent proteins could act as sun-blockers to protect the animals from harmful ultraviolet light or as a source of "antioxidants," molecules that help to prevent damage to cells related to temperature fluctuations and other environmental changes.

The study was funded by the U.S. Air Force Office of Scientific Research's Biomimetics, Biomaterials and Biointerfacial Sciences program and the Ministry of Education, Culture, Sports, Science and Technology of Japan.