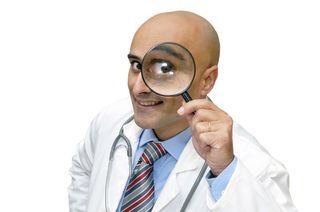 The elusive G-spot has been found, a researcher claims in a new report.

The famed orgasmic spot was identified as a region of tissue, about a third of an inch long and one-tenth of an inch wide, located on the anterior (towards the front of the body) vaginal wall, said Dr. Adam Ostrzenski, of the Institute of Gynecology, Inc., in St. Petersburg, Fla.

"It's a grape-like structure," Ostrzenski said. "Nothing else looks similar."

For his research, Ostrzenski examined the cadaver of an 83-year-old woman who had died from head trauma.

The structure that Ostrzenski found was sitting within a sac of protective tissue. When he removed the tissue from the sac — a careful dissection that took seven hours, he said — the tissue extended greatly in its size.

"When you remove it, it extends like an accordion," he said, likely because the structure is composed of erectile tissue.

Still, Ostrzenski noted that he did not look at the tissue under a microscope (the permission he had to work with the body did not allow such an examination, he said), and such a microscopic analysis could have led to a stronger conclusion that this tissue was, in fact, the G-spot.

Other experts were skeptical that the findings truly revealed the G-spot.

"This study adds to the debate, but as a whole, it doesn’t contribute new information" to what we know about the G-spot, said Dr. Amichai Kilchevsky, a urology resident at Yale-New Haven Hospital in Connecticut.

Kilchevsky recently led an analysis of 60 years of studies that had attempted to identify the G-spot. He concluded that the spot does not exist, and the new findings don't change his opinion, he said.

About a half-dozen of the studies Kilchevsky reviewed were done on corpses — some included 20 to 30 bodies, and the results from those studies were mixed.

In some of those studies, researchers had looked at the tissue on a microscopic level to find nerve enervation of the anterior vaginal wall, he said. "Some studies showed that there are more nerve endings in a specific regions, other studies didn't," he said.

Ostrzenski's study included "one cadaver, where they dissected an unknown structure, did no testing on the actual organ, and had no background information on the patient before her death," he said.

A more detailed analysis could have revealed more about the tissue, including whether certain chemicals associated with female sexual arousal were present, Kilchevsky said. But in any case, researchers are likely to learn more from dynamic studies of living patients — such as functional MRIs, which can show what happens to tissue when it's stimulated, he said.

The tissue that Ostrzenski found could perhaps be the internal portion of the clitoris, Kilchevsky said.

The new findings are published today (April 25) in the Journal of Sexual Medicine.

Pass it on: A new study adds to the debate over whether the G-spot exists.