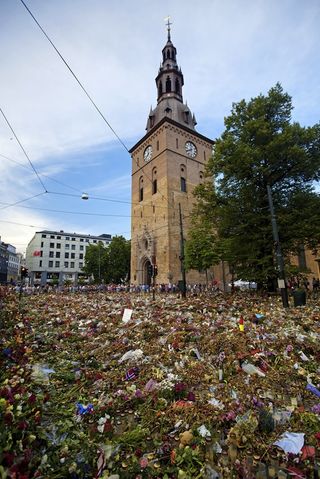 Norwegian gunman Anders Behring Breivik, who has admitted killing 77 people in bomb and gun attacks last July, has told judges his actions were political and he was acting in self-defense against a "multiculturalist" conspiracy. His extremist motivations, however, are less likely to determine his fate than whether the court finds him sane or insane.

In Norway, defendants qualify for an insanity defenseonly if they can prove they were in a state of psychosis and not in control of their own actions during the crime. One court-ordered psychiatric examination found Breivik insane, with psychiatrists writing that he was driven by delusions and paranoid schizophrenia. However, a second evaluation held he is sane, according to news reports.

Some U.S. states have a test for legal insanity that's similar to the one used in Norway, said Landy Sparr, the director of the forensic psychiatry training program at Oregon Health & Science University.

"You could have psychiatrists agree on the diagnosis but disagree on whether or not the defendant could control his actions at the time of the crime," Sparr told LiveScience.

The insanity defense has a long history: Even in ancient Rome, "lunatics" were not held accountable by the legal code, and English common law dating back to the 1200s allowed "madness" as a criminal defense. An early landmark case occurred in 1843, when a gunman named Daniel M'Naghten attempted to kill British Prime Minister Robert Peel in the belief Peel was trying to kill him. M'Naghten accidentally killed Peel's secretary instead; he was declared insane, prompting outrage among British politicians and the public. The case led to the establishment of "the M'Naghten rule," which held that defendant could be considered legally insaneif they did not understand the act they committed or that the act was wrong.

In the United States, 27 states still hold to this standard, Sparr said. Twenty-two others have added a second standard for qualifying for insanity, called the "volitional prong." If a defendant understands right from wrong but was still driven to commit a crime by an "irresistible impulse," he or she also could qualify for legal insanity, Sparr said. Norway uses a modification of this standard, asking whether a defendant was in control of his actions during the crime.[10 Controversial Psychiatric Disorders]

Legal insanity is not the same thing as a medical diagnosis of mental illness, Sparr added. Psychologists and psychiatrists can testify to a defendant's sanity or lack thereof, but it is up to juries to determine whether the defendant's mental state excuses him of liability for his crime.

"When a psychiatrist evaluates somebody, they don't write up an evaluation and then make a comment or statement about whether this person knows the difference between right and wrong," Sparr said. Such a statement would make no difference in treating a psychiatric condition, he said. But in the court of law, it can be the key to a case.

The insanity defense can be especially controversial in a high-profile case such as Breivik's. But in the U.S., that defensive strategy is actually quite rare: Only about 1 percent of criminal defendants use it, and juries reject about four of every five insanity pleas, according to West's Encyclopedia of American Law.

In many cases of severe insanity, the defendant is declared not competent to stand trial and is committed to a psychiatric facility. This was the case with Jared Loughner, accused of killing six people and wounding Rep. Gabrielle Giffords in a shooting spree in Tucson, Ariz., in 2011. Loughner is undergoing psychiatric treatment in the U.S. Medical Center for Federal Prisoners in Missouri. [Extremism in Prison (Infographic)]

People declared not guilty by reason of insanity don't walk free — like Loughner, they're committed. In many cases, an insanity defense can end with the defendant locked up for longer than he would have been under another defense.

"Especially for medium-level crimesand low-level crimes, you definitely are in the mental hospital longer" than you would spend in prison, Sparr said.

In a case of multiple murders, as Breivik is charged with committing, neither prison nor a psychiatric hospital is likely to lead to a quick release, Sparr said.

If found sane, Breivik would face a maximum 21-year prison sentence, with options to extend his incarceration if he is still considered a danger to society. If declared insane, the confessed killer would be involuntarily committed to a psychiatric facility for as long as he is considered ill.

Breivik himself wants to be sentenced as sane and has called the possibility of being found insane "the ultimate humiliation."