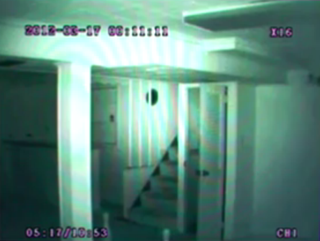 The "haunted house" in which paranormal investigators filmed a bowling pin toppling over, seemingly of its own accord.
(Image: © Shore Paranormal Research Society)

A couple has broken the lease on a rental home in Toms River, N.J., claiming the house is haunted. Jose Chinchilla and his fiancée, Michele Callan, are suing their landlord for the return of their $2,250 security deposit, arguing that paranormal activity — including eerie whispering sounds, flickering lights and slamming doors — forced them to flee the home just a week after moving in. They even brought in ghost hunters to verify their claims.

But the landlord has filed a countersuit, claiming the couple fabricated the ghost story to weasel out of paying the rent. A judge will hear the case later this month.

Whose side is the law on? Can you break a lease if your rental home is haunted?

"So much will turn on whether there's actually credible evidence of paranormal activity," said Eric Goldman, an associate law professor at Santa Clara University. "Usually the answer is there isn't any evidence, at which point no matter what the tenants say they'll have nothing to substantiate it."

Chinchilla and Callan have done their best to gather that evidence, having called in investigators from the Shore Paranormal Research Society, who managed to film some nighttime footage of a bowling pin falling over on the floor of the home just as people walked nearby. However, it could have been creaky floors that toppled the pin, and the footage is probably not enough to persuade a judge to rule in favor of the couple — and in favor of the existence of ghosts. [Watch the Ghost Hunters' Video]

Even if the judge were convinced by the couple's testimony, Goldman said, they also would have to prove that the landlord knew about the spectral presence in the house before he rented it to them — otherwise, there was nothing for him to disclose. "If neither party knew it was haunted [when the lease was signed], and the tenants prove later that it is, then the tenant is most likely going to be tough out of luck," Goldman told Life's Little Mysteries.

The annals of contract law history include a case in which the principle of poltergeist disclosure was famously upheld. In 1991, a man discovered that the house he had just contracted to purchase in Nyack, N.Y., was widely believed by the townspeople to be possessed by ghosts. Upon learning this, he took the sellers to court, arguing they should have informed him of the house's haunted history. He won the case, and the contract of sale was torn up.

"What made the haunted house case so unusual was that the sellers of the property were effectively stopped from arguing that the house wasn'thaunted," Goldman said. Some years before, he explained, they had been paid $3,000 by Reader's Digest for providing evidence of paranormal activity in the house, for use in an article. "So they were caught in a lie. Either the house was haunted, in which case they had to disclose that to the buyer, or it wasn't, in which case they had lied to the publication and taken 3,000 bucks." [Do Einstein's Laws Prove Ghosts Exist?]

Though they were forced to put their house back on the market, the sellers ultimately came out ahead, as the house's infamous ghostliness actually upped its market value among house-hunting ghost lovers. The same fate may await the rental home in New Jersey. "If in fact the video is enough substantial evidence to prove that the house is haunted," Goldman said, "then there will be a new market of tenants who will beg to come lease it."