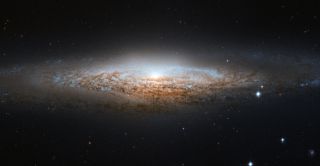 The Hubble Space Telescope has found a UFO, but this one is filled with stars instead of little green men.

The iconic space telescope snapped an amazing new photo of the "UFO Galaxy" — a galaxy 35 million light-years from Earth that is officially known as NGC 2683.

"NGC 2683 is a spiral galaxy seen almost edge-on, giving it the shape of a classic science fiction spaceship," NASA officials wrote in a recent image description.

The galaxy was originally discovered on Feb. 5, 1788 by famed astronomer William Herschel. It is located in the Lynx constellation in the northern sky. But it was astronomers with the Astronaut Memorial Planetarium and Observatory in Cocoa, Fla., that dubbed NGC 2683 a cosmic UFO.

Astronomers suspect that NGC 2683 is a barred spiral galaxy, but the edge-on view from Hubble and other telescopes makes it difficult to see the object's structure directly. The off-kilter vantage point, however, does offer scientists a unique galactic perspective.

"In particular, it gives astronomers a great opportunity to see the delicate dusty lanes of the spiral arms silhouetted against the golden haze of the galaxy’s core," NASA officials explained. "In addition, brilliant clusters of young blue stars shine scattered throughout the disc, mapping the galaxy's star-forming regions."

Astronomers combined two views (one in visible light and the other in infrared) from Hubble's Advanced Camera for Surveys to create the new image of the UFO Galaxy, which was unveiled on March 26. A gap between Hubble's light detectors created a blurry strip across the width of the image, so scientists filled it in with images from ground-based telescopes.

The Hubble Space Telescope has been snapping spectacular views of the universe for more than 20 years. It is a joint mission by NASA and the European Space Agency.

This story was provided by SPACE.com, a sister site to LiveScience. Follow SPACE.com for the latest in space science and exploration news on Twitter @Spacedotcomand on Facebook.