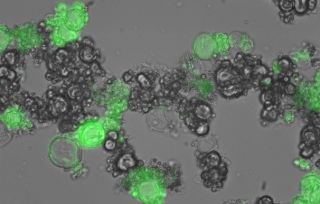 MIT researchers designed these particles that can produce proteins when ultraviolet light is shone on them. In this case, the protein is green fluorescent protein.
(Image: © Avi Schroeder)

Cancer that has spread throughout a person's body is tough to kill without causing too much collateral damage. But tiny "protein-factory" particles could target tumors specifically by manufacturing cancer-killing drugs anywhere within the human body.

MIT researchers now have created such tiny particles that could someday make cancer-killing proteins on demand. Such nanoparticles — materials that range roughly in size from 1/1000 to 1/100000 the diameter of a human hair — contain a mixture of biological machinery needed to make proteins based on DNA sequences.

"This is the first proof of concept that you can actually synthesize new compounds from inert starting materials inside the body," said Avi Schroeder, a postdoctoral researcher in MIT's David H. Koch Institute for Integrative Cancer Research and lead author of a paper detailed in the journal NanoLetters.

Schroeder and his colleagues also showed how to activate such tiny factories on demand through tests with mice. They used ultraviolet lighting to trigger the nanoparticles to release the DNA that would begin the manufacturing of proteins.

Making drugs on demand at specific sites within the body could prevent side effects from especially toxic cancer drugs, said James Heath, a professor of chemistry at the California Institute of Technology who did not participate in the study. He added that the MIT team now has to show that it can successfully deliver such drugs in humans.

"There are lots of details left to be worked out for this to be a viable therapeutic approach, but it is a really terrific and innovative concept, and it certainly gets one's imagination going," said Heath, who was not part of the research team.

The MIT team programmed its new nanoparticles to make either green fluorescent protein (GFP) or luciferase — both easily detectable — to prove how the drug-delivery concept could work. Next, it plans to work on different ways to trigger the nanoparticles based on acidity level or other specific biological conditions inside the human body.

Such nanoparticle success could also prove encouraging for the U.S. military. The Defense Advanced Research Projects Agency (DARPA) recently announced its futuristic vision for tiny nanosensors capable of monitoring soldiers' health and even treating them on right on the battlefield.