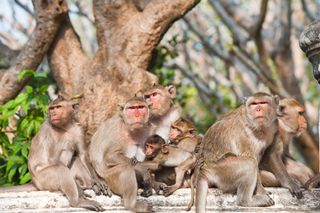 When put in a high-stress social environment, rhesus monkeys show it in their immune genes.
(Image: © tratong | Shutterstock)

The stress of being the new kid on the block may cause changes to the immune system, leaving the body vulnerable to getting sick, finds a new study on monkeys.

Researchers knew that social stress of being the low female on the dominance totem pole induces social stress in monkeys, but Jenny Tung, an associate professor at Duke University, wanted to see how this stress impacted them physically.

"It's possible to actually change an individual's social status and in that way induce social stress in some individuals and not others," Tung told LiveScience. "We extended prior work in rhesus macaques to the modern genomic era."

Researchers worked with 49 female rhesus macaque monkeys, placing them in new social environments in which they endured different levels of social stress. Ten new groups of five monkeys each were created, and a monkey's social status was determined by how early on they were placed into the group. The last monkeys to enter the group had the lowest social rank.

"Lower-ranking females are exposed to a different social environment. Day to day, they are subject to more stressful interactions," Tung said. "There are particular threatening faces and gestures that female macaques can make to each other. They [the low-ranking females] tend to be the target of those threat gestures more often."

But the low-ranking females weren't being slapped, bitten or kicked, she said. Instead, Tung said, they suffer a "social stress."

The researchers took the blood from each of these monkeys and analyzed it for differences in gene expression, which shows genes that are "active" and being turned into proteins. They saw big differences in genes related to the immune system and inflammation; these types of genes were expressed in much higher levels in the lowest-ranking individuals, indicating their immune systems were out of whack.

The researchers also had a second set of blood samples collected from seven of the monkeys after they moved up the social ladder. They saw that it was the social stress that caused the changes in gene expression, not individual differences in immune gene patterns.

"We were able to find that with changes in social environment, you see the gene-expression pattern seems to change with it. If you can improve your social environment, then that gene signature seems to go away too," Tung said. This means that by improving their social status, the monkeys could also improve their health.

"There's no direct parallel for macaque dominance ranks in humans, but we know that the social stress imposed by dominance ranks seems to have similar physiological effects as socioeconomic status or job ranks at work," Tung said.

The study was published today (April 9) in the journal Proceedings of the National Academy of Sciences.