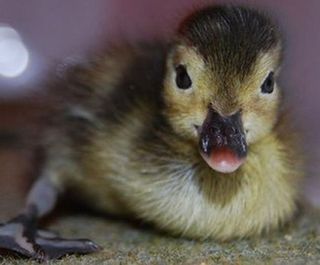 Eighteen Madagascan pochards—the rarest duck on the planet—are exuding cuteness in a captive breeding center in Antsohihy, Madagascar. These adorable ducklings represent nearly a third of the entire population of their critically endangered species, signaling new hope that these birds can be saved from extinction.

Madagascan pochards were thought to be extinct until explorers rediscovered 22 of them nesting at a small, forested lake in northern Madagascar in 2006. By July 2009 only six females remained. That’s when conservationists, in cooperation with the Malagasy government, opted to launch an emergency captive breeding program.

In an urgent twist on the Easter egg hunt, conservationists carefully removed 24 eggs from their nests and hatched them in incubators along the lakeshore and hotel bathrooms until the breeding facility could be built.

The new ducklings are the offspring of the now-two-year-old birds hatched from those extracted eggs. The plan is to train this new brood for life in the wild and to release them sometime in the future—if and when their caretakers can find a suitable habitat.

The lake where the lone population of wild birds still lives was once part of a system of wetlands throughout the Island’s central plateau, including many shallow lakes and extensive marshes. But a long history of lake drainage and the introduction of exotic fish has reduced the suitability of these wetlands for many birds, explains Glyn Young of the Durrell Wildlife Conservation Trust, one of several organizations that facilitates the captive breeding program.

Andy Bamford with the Wildfowl and Wetlands Trust, another partner in the project, spent several months in Madagascar with the ducks last year. He says the birds are surviving on this lake because it’s so remote, but it probably can’t support many more of them.

“Our initial investigations suggest there is too little food,” Bamford explains. “Few ducklings are surviving beyond a couple of weeks, and I suspect that they simply don’t have the strength to dive as deep or for as long as the adult birds in order to get to the invertebrates at the bottom of the lake. They are literally starving to death.”

That the birds breed successfully in captivity may be their greatest hope for survival. That, we can hope, will give conservationists time to locate more suitable lakes where these and future hatchlings can make their way in the wild.