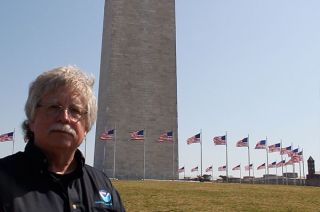 Teams of surveyors have descended on the area around the Washington Monument in recent weeks to search for any minute changes in ground level wrought by the 5.8 magnitude earthquake that rattled huge swaths of the East Coast last Aug. 23.

The surveyors with the National Geodetic Survey are equipped with the modern tools that have only increased the accuracy of the centuries-old practice of "leveling," and they are taking measurements that can reveal even sub-millimeter changes.

Geodesy (pronounced gee-ODD-uh-see) is the science that measures the Earth's changing shape, gravity field and orientation in space. It also pinpoints positions on the planet's surface in relationship with each other.

"It's probably the second most important science, next to physics, because literally everything is about place," said Dave Doyle, the NGS' chief geodetic surveyor and the man who had suggested the survey even before the 2011 Virginia-centered earthquake shook the nation's capital.

Although the area around the National Mall had been leveled, or surveyed, 17 times since the Washington Monument was completed in 1884, typically they were only "surveys of opportunity," as Doyle put it, conducted when a major project was under way.

Since much of the area is built on sand and gravel landfill, Doyle decided it was high time the area was monitored regularly, once every few years. "You've got millions of pounds sitting on top of this soil that can move," he told OurAmazingPlanet.

Doyle was sitting in front of his office computer, drafting a memo describing his idea, when the earthquake struck. It was uncanny timing, he said. However, he added, "the earthquake got everybody's attention."

The surveyors around the National Mall are looking at over 60 "bench marks" — markers embedded in places from the Washington Monument to the Capitol. Some of the bench marks have been in place for more than 100 years.

When a bench mark is installed, surveyors measure its height above ground level with astounding accuracy. Surveyors can then return to the marker generation after generation to measure how its height has changed. By doing so over a large area, geodesists can figure out if the ground is sinking or rising, and by how much.

The Washington Monument has sunk by about 2 inches (5 centimeters) since it was built, Doyle said. [8 Amazing National Park Structures]

The survey will wrap up in the first week of April, and it will take time to wade through all the data before any final results are announced.

However, Doyle said, so far the numbers are encouraging.

"I'm not seeing anything in the preliminary data in and around the monument that says, 'Stop the presses, we've got an enormous problem,' so that's a wonderful thing for everybody," he said. "Nothing huge has happened."

This story was provided by OurAmazingPlanet, a sister site to LiveScience. Reach Andrea Mustain at amustain@techmedianetwork.com. Follow her on Twitter @AndreaMustain.Follow OurAmazingPlanet for the latest in Earth science and exploration news on Twitter @OAPlanet and on Facebook.