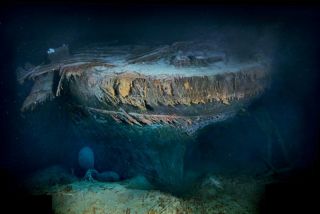 Just in time for the 100th anniversary of the most storied maritime disaster in history, National Geographic magazine and a team of researchers have unveiled new images of the Titanic, revealing unrestricted views of the wreck for the first time ever.

The detailed, sweeping images of the sunken ship were made by stitching together hundreds of optical and sonar images collected by three deep-diving robots during a 2010 Woods Hole Oceanographic Institution expedition.

The resulting images are the most comprehensive ever made of the ghostly site.

The initial survey covered an area about the size of Manhattan. The deep-diving vehicles made detailed maps of the seafloor, then moved in to concentrate on the colossal, broken pieces of the Titanic's wreckage, and the thousands of artifacts on the seafloor surrounding the shattered ship.

"There are very few places on the bottom of the ocean that we have a 25-year history of what's happened there, and this study will help scientists and others understand the long term fate of wrecks," WHOI's Bill Lange said in a statement.

"Having a better understanding of the conditions and long-term changes that can occur to these shipwrecks from corrosion, microbial activityand the pressure in the deep sea will give policymakers and environmental managers the tools and data they need," he said.

Lange was a member of the 1985 and 1986 WHOI teams that first discovered and explored the wreck. "There’s no doubt in my mind that the public's interest in Titanic helped propel the development of many of the technologies we use to explore the deep sea today," he said.

The dramatic images, made from 250 mosaics of the Titanic site, are published in the April 2012 issue of National Geographic Magazine.

RMS Titanic (a subsidiary of Premier Exhibitions Inc. and the only company permitted by law to recover objects from the wreck of Titanic) will be adding both still images and interactive applications of the work done by WHOI to its touring exhibits, "Titanic: The Artifact Exhibition." A full list of cities where these mosaics and more exclusive content from the most recent expedition will be on display is available online at www.rmstitanic.net.