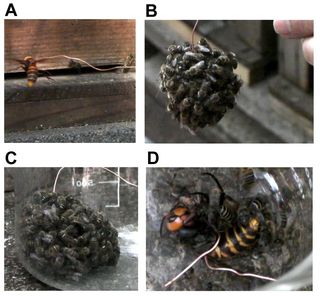 Worker bees forming a hot defensive bee ball. Click for whole series of images: (A) Presentation of a wire-hung hornet to the beehive as a decoy. (B) Hundreds of workers form a hot defensive bee ball surrounding the wire-hung giant hornet. (C) Bee ball recovered in a glass beaker. (D) The giant hornet is dead 60 min after the bee ball forms.
(Image: © Ugajin A, Kiya T, Kunieda T, Ono M, Yoshida T, et al. (2012) Detection of Neural Activity in the Brains of Japanese Honeybee Workers during the Formation of a ‘‘Hot Defensive Bee Ball’’. PLoS ONE 7(3): e32902. doi:10.1371/journal.pone.0032902)

The Japanese honeybee and the giant hornet are waging an epic war. The hornets, which can grow up to 1.6 inches (4 centimeters) long, attack the nests of the bees, and the honeybees will surround a hornet and "cook" it.

The honeybees' stingers can't penetrate a hornet's thick outer skin, so the bees swarm around an attacker instead, forming a spherical bee ball, and use their vibrating flight muscles to create heat. The mass of bees will heat the area up to 116 degrees Fahrenheit (47 degrees Celsius), enough to kill the hornet.

Scientists discovered these bee balls in 2005 and have been studying them ever since. Now researchers have figured out the bee-brain mechanism that regulates the thermo-balling behavior in Japanese honeybees but not in their relatives, the European honeybees.

The researchers plucked honeybees from the hot defensive bee ball at different times to see what parts of the brain were active. They found that cells in brain centers involved in complex behaviors were more active when in the hot ball than when the bees were carrying out other activities.

"It might be that the neurons located in this area are also involved in processing thermal information in the worker honeybees," the researchers wrote in the paper, published March 14 in the journal PLoS ONE.

This brain activation was also seen when the bees were exposed to heat, supporting the idea the brain region is sending out directions to keep the bees producing steady heat that's hot enough to kill the hornets, but not themselves. This neural activity wasn't seen in European honeybees.

"Because there is only 3 to 5 C difference [5 to 9 degrees F] in the lethal temperature between the Japanese honeybee and the giant hornet, accurate monitoring and precise control of heat generation during forming a hot defensive bee ball seem critical for the Japanese honeybees," they wrote.

These activated areas "might be involved in thermal information processing, to appropriately regulate the duration of flight muscle vibration and control heat generation during forming the bee ball."