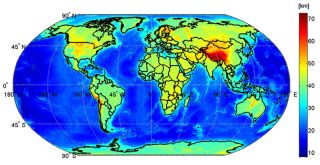 This map shows the global Mohorovicic discontinuity – known as Moho – based on data from the GOCE satellite.
(Image: © GEMMA project)

Beneath the Earth's crust, the outermost hard shell that makes up just 1 percent of the volume of the planet, lies a hot, viscous layer of rock called the mantle.

Together, the crust and upper portion of the mantle — called the lithosphere — are where most important geological processes occur, such as mountain-building, earthquakes and the source of volcanoes. The slow churning and overturning of the mantle is what drives the movements of Earth's tectonic plates.

New methods of observation using satellites are helping scientists learn more about this important layer of the Earth's interior and where it begins under different regions of the planet.

The mantle was completely unknown to science just a century ago, until Croatian seismologist Andrija Mohorovicic noticed in 1909 that seismic waves from earthquakes changed speed about 30 miles (50 kilometers) below the planet's surface. The spot of this sudden change marks the boundary between the crust and mantle, known in Mohorovicic's honor as the Mohorovicic discontinuity, or Moho.

Even today, the Moho is difficult to study, with geologists using two main methods: seismic and gravimetric.

Seismic is the way Mohorovicic first learned of the Moho's existence: seeing how seismic waves alter their speed and direction as they move from one layer of the Earth to another. The waves change because the properties of the rocks they are travelling through change, much like the way light bends as it travels through a crystal.

Gravimetry looks at the gravitational effect that the rocks under different parts of the Earth have due to their differing densities that in turn are a result of different rock compositions.

But models of the Moho made from both methods are generally limited by poor data coverage. Now, a new effort using the gravimetric approach with data from the European Space Agency's GOCE gravity satellite has now generated the first global high-resolution map of the boundary between Earth's crust and mantle.

The project — known as GEMMA (for GOCE Exploitation for Moho Modelling and Applications) — uses GOCE's more widespread and homogeneous data to provide a much clearer look at where the Moho sits.

The map shows that the Moho exists at a depth of about 40 miles (70 km) under mountainous regions such as the Himalayas, but is at a much shallower 6-mile (10 km) depth under the oceans.