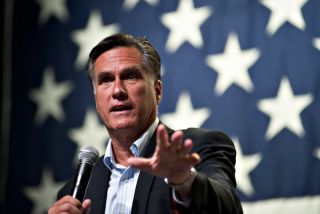 Does not just what you say, but how deep you say it, influence voters on election day? Republican nominee hopeful Mitt Romney speaks at a town hall meeting in Arizona in 2010.
(Image: © Christopher Halloran / Shutterstock.com)

Could the pitch of Mitt Romney's voice help decide the Republican presidential nomination? A new study suggests that it might: According to the research, voters prefer to cast their ballots for candidates with lower-pitched voices.

The study was conducted in a laboratory with fictional candidates, so it's not known how important voice pitch is in real-world elections. But the findings fit with earlier studies that suggest people do make judgments based on the sound of a voice.

"An existing body of research shows that low voice pitch in men and women signals things like social dominance and strength," said study researcher Casey Klofstad, a professor of political science at the University of Miami. "We are essentially able to confirm that this pans out in the realm of elections as well."

Klofstad and his colleagues at Duke University in North Carolina recorded 17 women and 10 men saying, "I urge you to vote for me this November." They then modified the recordings to create one high-pitched version of each voice and one low-pitched version.

Next, the researchers had a sample of 83 undergraduates listen to the women's recordings and choose which they would vote for out of each high-pitched and low-pitched pair. Another 89 students did the same for the male recordings. In a final experiment, 210 participants listened to each recording and rated which out of each pitch pair sounded stronger and more trustworthy and competent. [Quiz: Bizarre Presidential Elections]

The results revealed that both men and women who made their election pitches in, well, lower pitches were more likely to win — participants voted for the lower-pitched of the pairs at rates higher than chance. The proportion of votes for lower-pitched candidates hovered around 60 percent, the researchers reported today (March 13) in the journal Proceedings of the Royal Society B.

The final experiment shed some light on why voters might have leaned toward deep-voiced speakers. In general, deeper voices were viewed as stronger, more trustworthy and more competent than their high-pitched counterparts. There were some gender differences in this perception. For example, both men and women thought that lower-voiced women were stronger, more trustworthy and more competent.

But for male candidates, the gender split was a little different. Women weren't any more likely to see a lower-pitched man as strong, competent and trustworthy than they were a higher-pitched man. But men were.

"They find lower-voiced men to be stronger and more competent," Klofstad said.

The reason may be that men are evolutionarily attuned to judge other men's status, Klofstad said, a remnant of male-to-male competition.

Klofstad and his colleagues don't expect voice pitch to be the deciding factor in whether Mitt Romney or Rick Santorum ends up as a presidential nominee later this year. For one thing, Klofstad said, more real-world experiments are needed. The researchers also aren't discounting factors such as issues, the economy and partisanship, he said. They just want to "add perceptions of human voice onto the list."

If the results do hold outside the laboratory, they could be a contributing factor to the dearth of women in politics, Klofstad said. Women have higher-pitched voices than men on average, so they could face an uphill battle in being perceived as strong, trustworthy and electable compared with male opponents.

Klofstad and his colleagues plan to extend their research to real-world elections.

"While we are free to make our own choices at the polls, our study suggests that these choices can't be fully understood until we account for how our biology influences our perceptions," he said.