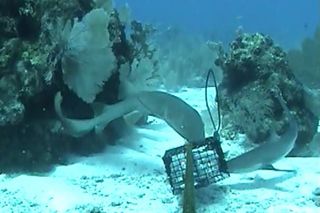 A still from footage taken at Belize’s Glover's Reef Marine Reserve shows a juvenile nurse shark and Caribbean reef shark (right) competing for access to the bait near a camera.
(Image: © Institute for Ocean Conservation Science at Stony Brook University.)

Scientists have been trying to answer the question of whether marine protected areas, where sharks and their prey are off-limits to fishermen, are indeed home to more sharks than non-protected areas of the ocean.

But how to monitor an environment where humans can spend only a few hours at a time?

Researchers from New York's Stony Brook University solved this problem by setting up 200 baited underwater video cameras, nicknamed "chum cams," to count Caribbean reef sharks (Carcharhinus perezi) inside and outside marine reserves on a reef in the Caribbean Sea.

Sharks, attracted by the smell of the bait, swam to the cameras, which allowed the research team to record, count and compare shark populations in two marine reserves to those in two areas where fishing is permitted.

Within the protected areas, sharks were caught on film at nearly four times as many camera sites as outside these areas, according to the research, which is published online today (March 8) in the journal PLoS One.

"Although we know that relatively sedentary reef fish and lobsters benefit from marine reserves, this study now presents visual proof that large, active sharks are also dramatically more abundant inside these protected areas, too," Mark Bond, lead author of the study and a doctoral student at Stony Brook University, said in a statement.

Caribbean reef sharks are listed as "near threatened" by the International Union for the Conservation of Nature, an independent body that assesses the conservation status of species around the world. Their dwindling numbers are due to intense fishing, according to the researchers.

Shark populations of many species around the world have declined precipitously in recent decades, many falling victim to the lucrative trade in fins for shark fin soup.

Scientists have been increasingly relying on cameras to count elusive and endangered terrestrial species, such as snow leopards.

"It is just as difficult to count sharks in the ocean, so we took a page from the big cat researchers' playbook and deployed baited video cameras to count the sharks," Demian Chapman, assistant professor at Stony Brook's School of Marine and Atmospheric Science, said in a statement.

"It's only fitting since these large apex predators are the 'big cats' of the sea," he said, "and like their feline counterparts, their continued existence on Earth is threatened."