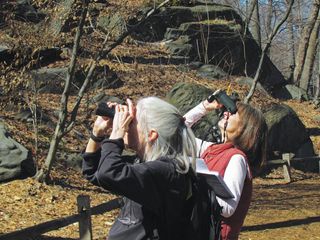 As an unusually mild winter ends and plants show signs of life, citizen scientists at the New York Botanical Garden have mobilized.

"Most people have been out since Feb. 20," said Jaime Boyer, a botanist at the Garden who oversees this volunteer program program, on Friday (March 2). In spring, the volunteers document when different species' leaf buds crack and leaves emerge, as well as the progress of their blooms.

Early on, volunteers keep an eye on the red maples, which flower before they get their leaves. And, as of Tueseday (March 6) two trees in the forest had opened sprays of tiny red blooms, according to Boyer. [Gallery: Signs of Early Spring in Brooklyn]

Evidence from within the U.S. and elsewhere shows many plants and animals are shifting the timing of their first blooms, leaves, migrations and other seasonal events (called phenology) in response to climate change. The volunteers contribute their data to Nature's Notebook, an observation program offered by the USA National Phenology Network.

The work requires precision — the citizen scientists at the Garden must have the keen observations skills to notice when, say, the leaves of a tree reach more than 75 percent of their adult size and recognize things like flowers on a maple.

A survey of the volunteers offered some insight into their motivations.

"They think they see the effects of climate change and they feel like they are powerless to do anything about it," said Boyer, director of children's education at the Garden. "The least they can do is collect information to make sure we understand what is going on."

The network was founded in 2007 — although it incorporates older data, including observations from genetically identical lilacs going back to 1956 — after it became clear that the United States lacked the kind of long-term observations of seasonal events found in other countries, according to Jake Weltzin, an ecologist with the U.S. Geological Survey and executive director of the Phenology Network.

A preliminary analysis of data collected in Nature's Notebook, from the Midwest to the Northeast, shows earlier leafing among some forest trees, such as oaks and maples, during the unusually warm spring of 2010, as compared with 2009 and 2011, according to Weltzin.

"We expect to see the same thing this year, and will be issuing a call to action for observers to record data for a set of common and important trees," he wrote in an email, referring to the unseasonably mild weather so far this year.