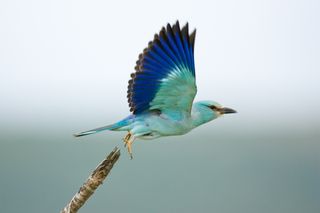 Ever been so nervous you upchucked? So scared you spewed? Well, baby birds are right there with you. Baby Eurasian rollers vomit a smelly orange liquid when scared by predators, which signals to their parents to stay away, new research indicates.

"The parents seem to be saving their own skin," study researcher Deseada Parejo, of Estación Experimental de Zonas Áridas, CSIC, told LiveScience in an email. "Parental birds are quite protective of their nestlings, but they have to be cautious too because if they die they cannot care for the surviving offspring."

Eurasian (also called European) rollers, Coracias garrulous, are violet- and turquoise-colored birds, with chestnut brown backs, which live throughout Europe, Asia, the Middle East and Africa. They live in abandoned nests and crevices in rocks and trees.

The researchers worked with rollers in a population that nests in breeding boxes in southeastern Spain. They watched 15 nests with baby birds (the oldest in any given nest was 10 days old) for half the day, then added either baby bird vomit scent (nine nests) or lemon scent (six nests) and watched for an additional 100 minutes. A researcher who didn't know which nests had which smells counted how quickly and how often the parents returned to the nest boxes.

Compared to when no scent was added, the vomit smell caused the parents stayed away from the nests for about 27 minutes longer and they skipped two feeding visits during the first 20 minutes. The "vomit-smell" fear seemed to dissipate by 100 minutes. The lemon scent caused the opposite effect — increasing visits to the nest.

This vomit signals fear, and lets the parents know there was a disturbance at nest. It may equate to the sight of the garage door left open when you come home from work suggesting someone has been in your house.

"Olfactory cues are used by birds in several biologically relevant contexts such as orientation and navigation, prey detection and individual recognition," Parejo said. Rollers might be more likely than other birds to use scented cues, since they live in cavities, which can be dark and make seeing difficult.

The baby birds also vomit when the handlers pick them up, so it might also have a defensive function, Parejo said. The nestlings aren't the only animals to upchuck under pressure.

"It is not a common behavior in birds, although adult Northern Fulmars Fulmaris glacialis expel digestive substances against intruders making them lose their waterproofing," Parejo told LiveScience in an email. "It seems to be a usual behavior in other animals. Indeed, many arthropods regurgitate their gut contents when disturbed."

The study is published in the March 7 issue of the journal Biology Letters.