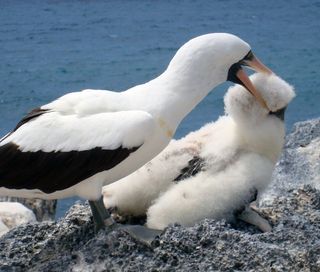 A Nazca booby bites an unrelated chick. An October 2011 study finds that abused chicks are likely to grow up as abusers themselves.
(Image: © Jacquelyn Grace)

Much like humans, birds that are abused as tots are more likely to become abusers later on, a new study finds.

Adult Nazca boobies, seabirds that live in colonies on the Galapagos Islands, often beat up on their neighbors' young. The new research finds these bullied nestlings turn into bullies as adults.

"We were surprised by the intense interest that many adults show in unrelated young, involving really rough treatment," study researcher Dave Anderson, a Wake Forest University biologist, said in a statement. "A bird's history as a target of abuse proved to be a strong predictor of its adult behavior." [See photos of the bullying birds]

The bird bullies — mostly female — patrol the breeding colonies, waiting for parents to leave their offspring to go forage. Then the adults pounce on the young birds, biting, pecking and even making sexual advances. The young are often left stressed and bleeding.

Using leg bands, Anderson and his colleagues tracked the birds over three breeding seasons, as nestlings grew up and returned to their birthplace to lay their own eggs. They reported their results in the October issue of the journal The Auk.

The finding that abused Nazca babies become victimizers later on is eerily similar to what social scientists have learned about the cycle of abuse in humans. According to the U.S. Department of Health and Human Services, about 30 percent of abused and neglected children will grow up to victimize their own children.

Researchers even believe that this cycle may have the same root in both birds and humans: Stress hormones surge after bird abuse, according to a recent study by another Wake Forest researcher, doctoral student Jacquelyn Grace.

"It's fascinating that what many would consider an extremely complex human phenomenon is also occurring — perhaps through the same physiological mechanism — in Nazca boobies, which are more closely related to crocodiles than mammals," Grace said in a statement. "Both studies suggest Nazca boobies might be a good model system to begin understanding the mechanisms underlying the cycle of violence in humans."