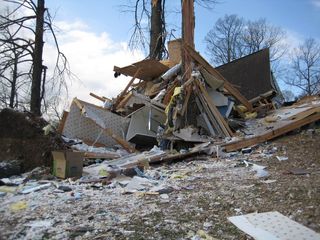 Tornadoes can, and have hit the same place twice. Just ask the folks in Harvest, Ala. After this past weekend, they have now been hit twice in 10 months.

An entire month's worth of tornadoes struck across parts of the country from March 2 into the morning of March 3. The town of Harvest, near Huntsville, was one of the first places hit by a storm system that went on to spawn some 80 twisters, just days after deadly tornadoes struck on Leap Day. No one was killed in Harvest, but across the South and Midwest, nearly 40 people died during the weekend outbreak. West Liberty, Ky., which was destroyed by twisters over the weekend, saw tornadoes during both outbreaks.

During the April 27, 2011, outbreak — the largest tornado outbreak in recorded U.S. history — Harvest was socked by a killer tornado. This year, several tornadoes touched down in the area, the strongest being an EF-3 on the tornado damage scale.

Some residents had just gotten their homes back in order, only to see their hard work wiped away by tornadoes — again.

"I kind of expected there to be more storms again this year, but you never expect it to hit the same place twice," Cody Stewart, who has lost his home to tornadoes twice in 10 months, told the Associated Press. "I think I'm going to live in an apartment awhile."

There have been a few other mind-boggling examples of tornadoes striking twice, according to the National Oceanic and Atmospheric Administration. In Cordell, Kan., a tornado hit on May 20 three years in a row from 1916 to 1918. In Guy, Ark., three tornadoes once hit the same church on the same day.